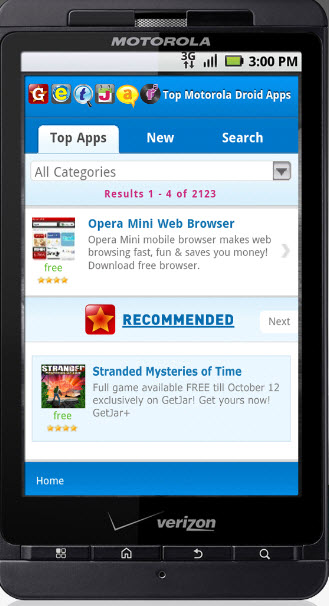 Mobile app store operator GetJar plans to shake up the mobile game industry by giving away millions of copies of mobile games for free.

That’s going to make it tough on companies that are trying to sell high-quality mobile games, but it will also give GetJar a shot at higher revenue by encouraging players to sample free games and then buy later.

San Mateo, Calif.-based GetJar runs what it calls the world’s second largest app store, after Apple’s App Store. It sells games and other apps for its mainstay business. But in a partnership with Glu Mobile, GetJar will provide consumers with a number of Glu games for free in a two-week pilot program at GetJar.com.

“We anticipate we’ll give away a couple of million games or so,” said Patrick Mork, chief marketing officer of GetJar. “What we’re trying to do is widen the market.”

Under the GetJar+ program, the company is giving away premium games, though they aren’t brand new titles. The games will have no ads, registrations, or any other catches. The promotion will last for two weeks. GetJar’s app store has had more than 1 billion downloads in 200 countries. It generates nearly 100 million downloads a month across 2,300 handsets. The GetJar store has 70,000 apps.

Mork said in an interview that GetJar’s scale allows it to do the free promotion, much like TV shows are free in comparison to movie theater shows. GetJar doesn’t need to rely on the revenue from the sale of its apps; rather, it generates revenue from sponsors who want their apps placed on the best spots on the site. GetJar can then use that money to buy a premium game from a publisher and distribute it to consumers for free.

The new business model is being tested. But if it works, then users could get access to many more apps for free, even if those apps are high-end games by mobile standards, Mork said. Olivier Bernard, managing director of Glu EMEA and APAC, said the deal will let Glu reach many game-hungry consumers who might not otherwise buy premium games.

The games will be in GetJar.com’s “recommended” section, available on the Android, BlackBerry and Java phone platforms. The free games include Brain Genius 2, Stranded: Mysteries of Time, Build-a-lot and Race Driver Grid. If the program works well, GetJar could give away new games every couple of weeks or so.

Mork said it was possible that GetJar could put ads in the free games and cross-promote paid apps. But that’s not part of this current experiment. One of GetJar’s primary strategies is to position its store as the place where apps can get discovered. This kind of trick for the discovery of apps is what we’ll be talking about at DiscoveryBeat 2010.

Getting content noticed is a challenge for everyone making apps. Join us at DiscoveryBeat 2010 and hear secrets from top industry executives about how to break through and profit in the new cross-platform app ecosystem. From metrics to monetization, we’ll take an in-depth look at the best discovery strategies and why they’re working. The conference takes place on October 18th at the Mission Bay Conference Center in San Francisco. Sponsors can contact us at sponsors@venturebeat.com. To buy tickets, click here.