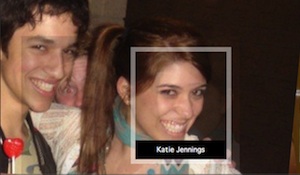 Chief Product Officer Jason Mitura said Viewdle stands out from other facial recognition companies in two ways. First, it’s focused on making its technology work using the limited hardware of a smartphone, not just on an online server. Second, competitors promising facial recognition on the phone haven’t delivered, Mitura said, whereas Viewdle has a real product that will be available for sale next year. (Competitor Polar Rose was recently acquired by Apple.)

What’s so great about being able to recognize faces on your phone? Viewdle’s technology will be built into your phone’s camera, Mitura said, so when you take a photo, the people in it will be tagged automatically. Then the photo can be posted automatically to sites like Facebook with all the tags already in place.

“Calling it a ‘tag’ doesn’t really mean much,” Mitura said. “I look at it as routing data. Viewdle generates all this fantastic routing data and pushes it from node to node in the social graph.”

Palo Alto, Calif.-based Viewdle is working with manufacturing partners to get its technology pre-installed on phones. It’s too early to announce those partners, Mitura said, but he did note that most of the company’s latest investors are strategic. So whatever the exact nature of the deals, we can probably expect BlackBerry, Qualcomm, and Best Buy to be involved.

Anthem Venture Partners, which invested $2.5 million in Viewdle’s first round, also contributed to the new funding.