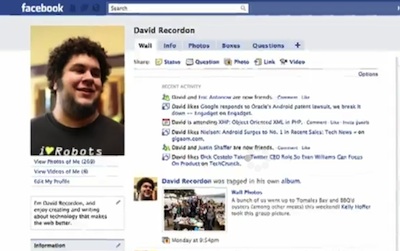 Even though I’ve already blogged about Facebook’s press conference this morning, I had a hard time wrapping my mind around the first announcement — a new feature that allows users to download all their Facebook account information. Facebook executives kept emphasizing the idea that normal users, not just computer scientists, will be able to use the feature, which sounds great. But what can normal users actually do with the data?

So I’m glad I got a chance to sit down with a couple of Facebook representatives. When I asked, David Recordon, the company’s head of open source engineering, told me, “That’s a good question.” Which was partially tongue-in-cheek, but was also a way of conveying a common startup idea: We have a couple of ideas about how people might use this new feature, but we really want to see what everyone else comes up with.

On one level, the move sounds symbolic. Recordon noted that many of Facebook’s recent announcements have been around the idea of Facebook as a platform, where it’s sharing user data with external developers and websites. This represents the “flip side” he said, where users themselves get access to the data.

That’s why it had to be simple, Recordon said — users just click a button, then Facebook prepares a download file and emails you when it’s ready. You download the file. unzip it, and open it in a Web browser, where it can be navigated like a normal Facebook page. (The common way to export your data from websites right now is as an XML-format file. That doesn’t do a non-technical user a whole lot of good, unless they import the data into another application.)

To demonstrate, Recordon showed me his own archived profile and navigated back to some of the first messages users had sent him — prompting Ami Vora from the Groups team (who I was also interviewing) to note that these profiles can function as a “personal time capsule”. Users might also embrace the feature so they can download and access all their Facebook photos on their desktop.

I agree that it will feel nice to have a copy of my Facebook profile on my computer, even if I don’t actually do anything with it. Plus, the feature should still help Facebook respond when critics complain that the site “owns” all your data.