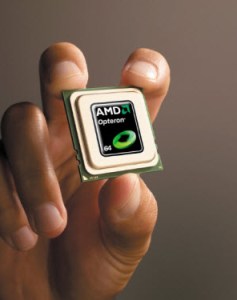 Chip-maker Advanced Micro Devices is not going to be up for sale any time soon, its chief executive, Dirk Meyer, said today in response to Oracle’s recent interest in making acquisitions in the chip-manufacturing sector.

But the AMD executive said the company would listen to any potential propositions that would be good for shareholders, according to a report from Reuters. Meyer made the comments at an industry conference in Barcelona, Spain.

Oracle CEO Larry Ellison said his company would be on the lookout for acquisitions in the chip-manufacturing sector to help bolster its computer hardware portfolio. He made the comments at the Oracle OpenWorld 2010 conference last month. ARM holdings was the most recent subject of buyout speculation from Oracle — which spurred a bit of buying in the stock market about two weeks ago.

Sunnyvale, Calif.-based AMD is the second largest supplier of chips on the x86 architecture — which Intel also manufactures on — that appear in most PCs and servers. But the recent explosion of popularity in the mobile space has led to greater demand for low-power chips like Apple’s A4 and the Qualcomm Snapdragon, which are manufactured on the ARM architecture.

AMD investors were largely unfazed by Meyer’s statement, with shares of AMD only down about a third of a percent to $6.84 after the bell.