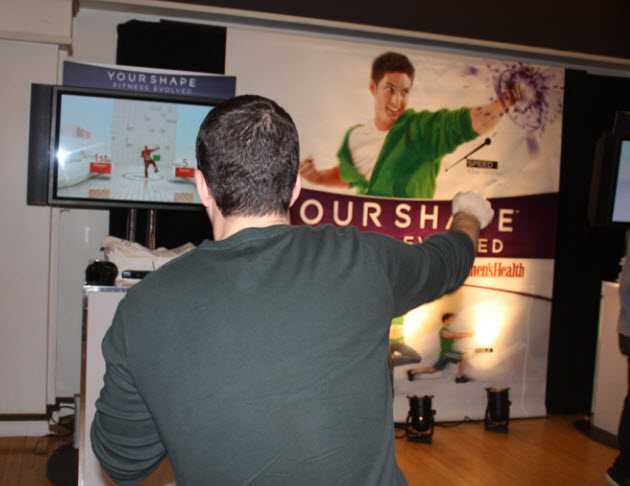 The new games represent a big investment in Kinect, which uses a 3D camera to capture your movement and translate that into controls for games on the Xbox 360 video game console. For the games, Ubisoft went with the most logical genres: fitness, fighting, sports and music. Kinect goes on sale on Nov. 4, and Microsoft hopes it will create the biggest splash in the game industry since the launch of the Nintendo Wii in 2006.

The games include Fighters Uncaged, a street combat game where you can throw punches, block, or kick your opponents. Ubisoft also created Motion Sports, which has mini games from skiing to boxing. The fitness game is Your Shape Fitness Evolved, which inserts your own mirror image into the game and gives you a workout by having you copy the motions of the onscreen guides. Another cool experience is Child of Eden, a music-shooting game created by famous Japanese game developer Tetsuya Mizuguchi. 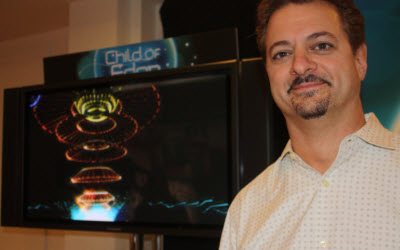 “These are the most natural games for a control system like Kinect,” said Tony Key (pictured right), senior vice president of sales and marketing at Ubisoft, in an interview at the company’s showcase event in San Francisco.

Ubisoft hasn’t abandoned the Wii. It has two major music games coming out on Nintendo’s platform: Just Dance 2 (which will feature a new Katie Perry song as free downloadable content) and a Michael Jackson music game. Just Dance sold 4.3 million units on the Wii so far, and its sequel debuts Oct. 12 on the Wii. As for the dance category itself, Key says, “It’s about to explode, and we’ve got two of the biggest brands.”

I found that all of the games were fun, but not perfect. The Kinect motion control system has the slightest bit of delay, or latency. In the boxing game on Motion Sports, for instance, I couldn’t punch in rapid succession. Rather, I had to take a swing, wait for the result, and then take another punch. Kinect was essentially too slow to capture my rapid-fire motion. I noticed the same thing with the Fighters Uncaged game. The delays in punching and kicking don’t kill all of the joy, but game designers should remember that they have to design around the delays. 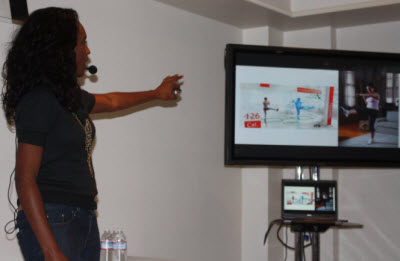 The good thing about all of the games is that, if you play them for a lot longer than I did, they would truly be exhausting. For a sedentary fellow like me, that’s a good thing. In Motion Sports, I had a tough time keeping my hang glider on target because it required me to stay poised in one position for a long time. It puts a strain on your muscles, even though it seems like a simple act. Nintendo games such as Wii Fit and Wii Sports Resort get me tired, but they haven’t held my attention long enough to get me into great shape. These new games go a step farther in that direction.

Ubisoft’s Your Shape (pictured right, and at top) lets you play a bunch of mini games such as catching a bunch of falling blocks on a plank and then making them fall in the proper direction. You can punch and kick in a faux kickboxing cardio workout or do something nice and elegant like yoga. Then you can upload your performance — and calories burned — to the web. On the web site, you can track your progress and share it with friends. The only thing missing is the Wii Balance Board, which would capture your weight loss. With just a camera, Kinect has no way to figure out how much weight you’ve lost, which is one of the key measures of a fitness program. The great hope for all of these fitness games is that gamers will lose themselves in the fun experience and not notice that they’re getting a good workout. 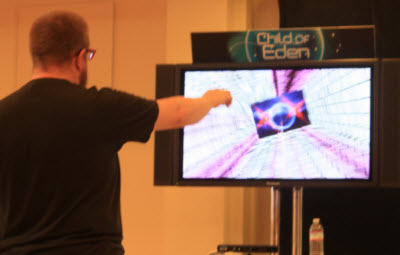 Child of Eden won’t be ready until next year, and I only got to see a small slice of the game. I found the control of that game difficult, since it’s hard to aim and shoot by moving your hand. It confirmed my suspicion that Kinect’s motion detection is too coarse to detect the pull of a trigger with a single finger. To capture a shooting motion, you had to move your hand over a target and then push your hand forward to the Kinect camera. That gesture is something that Kinect can easily detect, but it’s not the most natural thing you want to do in a shooting game. Of course, Child of Eden isn’t finished, so I’ll withhold my judgment until it is.

These are good games, but it’s good to remember they are just the beginning of a big wave of motion control games coming. So far, they seem just as good, or somewhat better, than the games I’ve checked out for the Sony PlayStation Move.

Check out our video with Key, who gives us a visual tour of all of the games. And check out my own demo of the Motion Sports game, which got me sweating profusely.