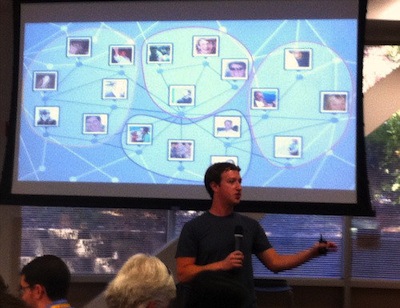 Facebook just unveiled a new way for users to interact with their friends on the social networking site. Speaking to reporters today at the company’s headquarters in Palo Alto, chief executive Mark Zuckerberg said the new version of Facebook’s Groups feature “blows everything else away.”

The site previously had a product called Groups, which Facebook hasn’t emphasized recently. Facebook also previously allowed users to manage groups by creating friend lists for individual use. But the new Groups feature sounds much more ambitious than either product.

Users create a Group where they can post photos, collaborate on wiki-style documents, start group chats, and more. Then they can add Facebook friends to the Group. For example, you could have one group for your family, one for your college friends, and a third for your co-workers. If you don’t want to join a Group, you can always drop out, which also prevents anyone from inviting you again. By default, the activity in these Groups is hidden from anyone who hasn’t been added.

Zuckerberg said the Groups approach should solve a big problem Facebook’s faced in allowing users only a single social network when in reality people’s lives are really a bunch of overlapping networks. (That’s an interesting comment from Zuckerberg who repeatedly says that users only have one social identity, although I guess it’s not completely contradictory.)

The friend lists were a “product approach” to the issue, Zuckerberg said. The problem was that only 5 to 10 percent of users bothered to create lists. Facebook also experimented with an “algorithmic approach”: In its chat service, Facebook highlighted the people a user interacted with the most. Unfortunately, the algorithm might guess wrongly about who’s most relevant, plus a user might not want someone looking over their shoulder to see who they’re talking to the most.

The new Groups feature, on the other hand, is supposed to epitomize a “social design”. It allows friends to invite other friends to the feature in an organic way, in the same way that the ability to tag friends allowed Facebook Photos to take off a few years ago. If only 5 or 10 percent of users actually create Groups, it’s still going to spread quickly as they invite people and create multiple groups.

Vice president of product, Chris Cox, described the social design approach as “a new way of approaching old problems.” The key insight, he said, is that “the interactions of one person … affect and organize the interactions of the people around them.”

And Zuckerberg hinted that this is one of the ways that Facebook plans to stay ahead of competitors. Social design, he said, is “what Facebook does.”

Google, meanwhile, is working on a social product or products (the details haven’t been announced), which we’ve heard caused Facebook to enter its recent “lockdown” period of intense product development. Zuckerberg didn’t mention the company explicitly, but he probably had Google in mind when he said that if the groups problem could be solved with a product approach or an algorithmic approach, “some other company would have solved it.”

Update: I had a chance to interview Facebook team members for a few more details about Groups. One of their main points: Even though the feature was designed for social use by small collections of users, it should be work in other cases too. For example, there’s no cap on the size of a group. The nature of the interaction will be very different between large and small Groups, but there’s no reason that large groups couldn’t be useful too, said Andrew Bosworth, the company’s director of engineering. (The bloggers and reporters Group that I was invited to this morning is already approaching 100 members. We’ll see if it’s actually useful.)

I was also curious about whether Groups could be used for work-related purposes, say collaboration between a team in the office. Andrew Bosworth, the company’s director of engineering, said that once again, that’s not really what the Feature was designed for, but it could be used that way. In fact, he showed me that his team was using a Group to help coordinate the wider launch of Groups.

Oh, and now that I’ve had some time to catch my breath I should probably add a little clarification about the headline. Obviously, I don’t think that Groups on its own is going to make or break Facebook and destroy the competition — even if it is as incredibly useful as the company promises. But it does sound like Facebook executives think the social design principles behind Groups are part of what sets them part, and that the “algorithmic approach” might be part of why Google’s social efforts like Buzz and Wave haven’t taken off. 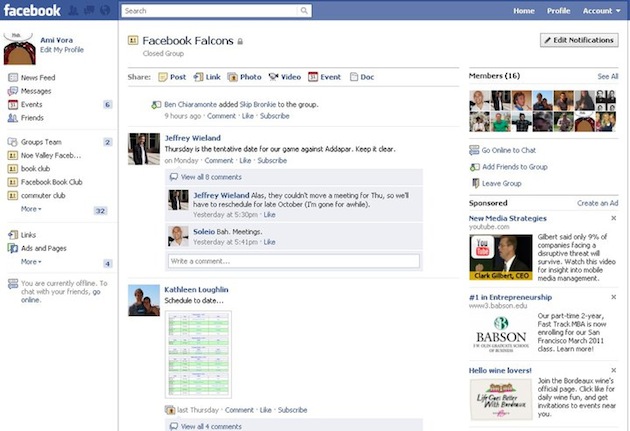