Solar panels are about to get more efficient, potentially boosting investment throughout the sector thanks to new technology that improves their ability to generate electricity from the sun.

Microinverter maker Enphase Energy announced today that its microinverter technology will power 4.5 megawatts of solar projects developed and operated by Main Street Power and financed by Morgan Stanley. The news is the latest in a flurry of activity as the solar-optimization business heats up and solar companies look to maximize energy output of its systems.

Enphase is currently the leader in microinverter technology (pictured below), and the company says its technology can increase energy harvest by five to 25 percent. Other solar optimization players have been emerging with new product announcements as of late that also claim up to a 25 percent increase in solar power generated — SolarBridge and NEA-backed Azuray among them. SunPower and Suntech are among the panel manufacturers who are teaming with them to produce optimized panels. 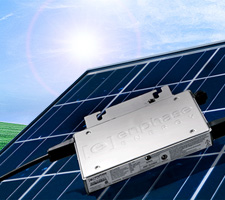 Here’s how microinverters work: Solar panels are connected in a series, so if one panel starts to fail or underperform (say, shade or dirt falls on it), it drags down output of the entire system because the entire system must be producing one consistent current — so total system output is defined by the weakest panel.

Microinverters solve this problem because they can be attached to individual panels, allowing them  to function separately from the series. The microinverter converts the direct current (DC power) produced by the panels into the alternating current (AC power) used by the grid. Some integrate further ability to monitor, adjust and maximize panels through maximum power point tracking technologies (MPPT).

Panels that use solar-optimization technologies are termed “smart panels,” because they can react to underperforming panels and make adjustments to maximize energy production. Solar systems are already limited in how much sunlight gets converted into usable energy, so maximizing output and bringing down costs is an important issue for the viability of solar. Greentech Media has named microinverter and solar optimizers as “one of the strongest sub-segments for VC investors in solar.”

“For solar energy to become truly mainstream among residential and commercial sites, installation and operating costs must come down, and energy harvest must go up,” said Ron Van Dell, president and CEO of SolarBridge.

As of late, solar module manufacturers have been teaming with microinverter companies to produce these smart panels. In the past few days alone, companies have unstealthed and announced partnerships ahead of the Solar Power International conference starting tomorrow in Los Angeles: