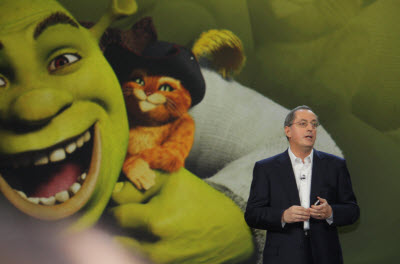 Intel reported that its revenues and profits for the third quarter beat hit expectations, largely because the world’s biggest chip maker reduced its expectations weeks ago.

The company said net income was $3 billion, or 52 cents per share, up 59 percent from a year earlier. Analysts had expected 50 cents a share, according to Thomson Reuters. Sales for the Santa Clara, Calif.-based company were up 18 percent to $11.1 billion, topping analysts’ forecasts of $11 billion. Intel’s results are closely watched as a bellwether for the tech economy.

Inte chief executive Paul Otellini said in a conference call with analysts that the company was pleased with its results in an economy “filled with uncertainty.” He said the company is on track to deliver its best revenues ever in 2010. But Intel said in August that its third-quarter performance would be weaker than previously forecast because of weaker demand for personal computers. Intel shares rose 1 percent in after-hours trading.

Otellini said that sales were driven by solid demand from corporate customers, thanks in large part to new server chips that Intel introduced in the past year.

As for tablets, Otellini said tablet computers are exciting and that Apple had done a “wonderful job reinventing the category,” even though they do not use Intel chips. He said that they would expand the computing market, and will likely affect demand for PCs “at the margins.” Overall, much like netbooks, Otellini said that Intel would participate in the long-term market for tablets.

He said in coming months partners would launch Windows, Meego, and Android tablet computers that use Intel chips. Overall, the net result of tablet computing’s popularity would be additive to Intel’s performance and not take away from it.

Overall, Otellini said that worldwide demand for PCs remains healthy. Otellini said there was softness in consumer markets in North America and Europe, but revenues were strong in enterprise computers as corporations upgraded to new servers to deal with all sorts of Internet demand.

During the third quarter, Intel agreed to buy security firm McAfee for $7.7 billion. The company said it plans no other large acquisitions, based on current plans.

Otellini said that Intel is seeing great demand for its next-generation microprocessor, code-named Sandy Bridge, which will debut in the first quarter. Sandy Bridge combines an Atom processor with a graphics chip in the same chip. As such, it represents a challenge to graphics chips made by Nvidia.

In the quarter, Intel’s average microprocessor prices were flat compared to the previous quarter and up significantly from a year ago. For the fourth quarter, Intel anticipates revenue of $11.4 billion, plus or minus $400 million. Gross profit margins, or the percentage profit for products sold, will be 67 percent, plus or minus a couple of percentage points. For the full year, Intel expects research and development spending of $3.2 billion and capital spending of $5.2 billion.

Intel’s strong points in the consumer markets this quarter were in China and emerging markets.