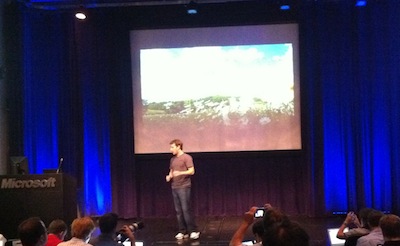 Facebook and Microsoft took their partnership a step further today by expanding Facebook’s integration with Bing. Why Microsoft rather than Google? Microsoft and Facebook have a preexisting relationship (Microsoft invested in Facebook, and the companies have previously worked together on search and ads), but Facebook chief executive Mark Zuckerberg said there’s a reason he likes working with Bing: It’s an underdog.

That’s actually a general rule with Facebook’s platform strategy, Zuckerberg said — when choosing its closest partners, Facebook prefers working with “really scrappy” underdogs. Those underdogs are more likely to understand the potential to “go deep” with Facebook’s social features. For example, much of the success on Facebook’s applications platform has come from games, and social gaming was led by startups like Zynga, not established game companies.

It’s strange to hear Microsoft described as scrappy, but in search it is indeed an underdog against Google. That’s not just a matter of marketshare, either — whenever I’ve spoken to Bing team members, they really do seem more humble and open to new ideas than other Microsoft employees.

With incumbent leaders, even smart incumbents like Google, there’s always a tension between innovating and protecting what you have, Zuckerberg said.

Microsoft and Facebook employees are still talking about the new integration, which I’ll cover in a separate post.

Update: Read this post for more details about the Bing-Facebook announcement.

Zuckerberg discussed this issue again during the question-and-answer session at the end of press conference. He said Facebook would be open to working on a similar integration with Facebook (“We would like to work with everyone”), but that Microsoft seemed like it was a better partner to start with for the reasons mentioned above.

“If you look at a lot of great companies that have done innovation, they tend to not be the incumbents,” he said.