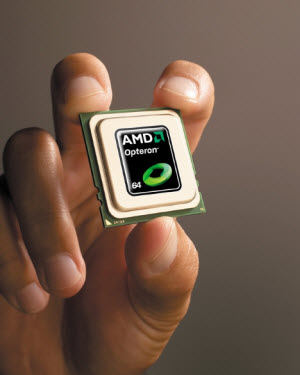 Sunnyvale, Calif.-based AMD is a major chip design company, competing with Intel in the multi-billion dollar market for microprocessors, which are the brains of computers. Its fortunes generally reflect the state of the personal computer market. In the third quarter, revenues were $1.62 billion, up 16 percent from $1.4 billion a year ago. The net loss was $118 million, or 17 cents a share, compared with a net loss of $128 million, or 18 cents a share, a year ago.

During the quarter, AMD shipped a record number of microprocessors. It also reported sequential revenue gains in both desktop and laptop processor segments. AMD had warned in September that its revenues would be lower due to slowing demand for PCs. The company said that the popularity of the iPad might have hurt laptop chip sales.

Dirk Meyer, chief executive of AMD, said that gross profit margins of 46 percent were solid, though consumer demand was weaker than expected during the back-to-school quarter. In the fourth quarter, Meyer said that AMD will begin shipping its Fusion processors, which combine a microprocessor and a graphics processor in the same chip. Actual launches of computers with the Fusion processors will happen early next year.

AMD ended the quarter with $1.73 billion in cash, down somewhat because of debt repurchasing. Average microprocessor selling prices declined slightly compared to the second quarter and were up compared to a year ago.

In a conference call, Meyer said that AMD will ship its second-generation AMD DirectX 11 chips next week.