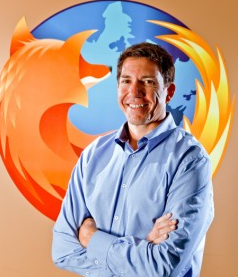 Mozilla Corporation announced today that it has appointed former Adobe executive Gary Kovacs at the helm of the company, ending the search for a new CEO to run the for-profit software subsidiary of the nonprofit Mozilla Foundation.

Kovacs was most recently general manager and vice president of mobile and devices at Adobe. He joined the software maker through its acquisition of Macromedia, where he was VP of Marketing prior, and has held senior roles at IBM, Sybase, and Zi Corporation.

Back in May, current CEO John Lilly revealed plans to exit the company to join venture firm Greylock Partners as a venture partner. Lilly took over from long-time Mozilla chief Mitchell Baker, who still runs the foundation, in May 2008. Since then, he led the company’s flagship Firefox browser from 20 million to 400 million users. He will continue to remain on the company’s board.

In a blog post introducing his replacement, Lilly noted Kovacs’ extensive background and experience with mobile, rich media, and working in large organizations are some of the things that made the candidate most suitable for his new post.

The announcement comes at a time when Firefox’s dominance from being widely regarded as the only viable standalone replacement for Microsoft’s Internet Explorer, the past and current market leader, has been faced with vigorous competition from Google’s Chrome and Apple’s Safari. Both browsers, while still operating at a lower proportion to Firefox’s market share (6.73% and 4.72% in comparison to 24.59%, respectively), have shown significant signs of emergence and growth.

Kovacs is intended to start at Mozilla early next month. The company plans to schedule a series of events later in the year in order to give its community a chance to meet their new chief.