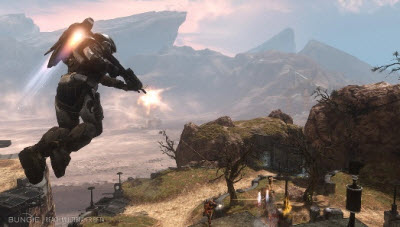 The U.S. video game industry saw its sales fall 8 percent in September compared to a year ago, according to the latest sales report from market researcher NPD Group. Were it not for the launch of Microsoft’s Halo: Reach game, it would have been a truly dismal launch month for traditional console games.

In this month’s report, NPD changed the way that it releases data about the video game market, keeping some data to itself and releasing other data for the first time in its monthly report. However you slice it, though, the news for sales of physical goods in retail stores is still weak. At the same time, sales of digital goods such as downloads on the game consoles and virtual goods in online games are growing like gangbusters. NPD hasn’t yet released those figures on a monthly basis, though it will release digital sales for the first half of the year on Friday.

“While industry sales of new physical retail [games] show a decline versus year ago, it’s important to remember that there is a growing volume of content being sold digitally, or otherwise outside the traditional retail channel,” said Anita Frazier, analyst at NPD. “These numbers reflect the largest channel for hardware, software and accessories sales, but there are content sales happening elsewhere.”

All year long, it’s been pretty obvious that as sales of social and mobile games are skyrocketing, sales of traditional console games and handheld games are going down. That’s a big change for the industry, and NPD is still trying to catch up with it.

NPD will no longer release monthly unit sales of hardware, though console makers are free to release their numbers. Microsoft has in fact released its number, since it has something to crow about. The company sold 484,000 Xbox 360 consoles during September, up 37 percent from a year ago. Nintendo said it sold 403,000 DS units in September and 254,000 Wiis. In the past 12 months, it has sold 9.68 million DS units and 8.79 Wiis.

On a qualitative basis, Frazier said that the Xbox 360’s unit sales were up in September, while the other platforms saw declines. The average retail sales of hardware actually increased this month because Microsoft bundled Halo: Reach, its hit game of the month, with the Xbox 360, and Sony bundled the new Move motion-sensing controller with its PlayStation 3.

The top-selling game of the month was Halo: Reach, with 3.3 million units sold, not included those bundled with hardware. That number is comparable to the first-month sales of both Halo 3 and Halo 2 in past years. Microsoft is betting it has more hits on the way, with the Oct. 26 release of Fable III and the Nov. 4 launch of Kinect, which is a motion-sensing system where a 3D camera can detect your entire body’s movements and turn them into game controls.

After Halo: Reach, the top-selling games of September, in order, were Madden NFL 11, Dead Rising 2, NHL 11, and FIFA Soccer 11.

Accessory sales saw an increase in the month because of the PlayStation Move’s launch.

If you want precise details on the changes that NPD made, here you go:

– removal of monthly hardware unit sales figures
– a shift in the Top 10 software from sku level with unit sales for the Top 5, to Top 10 software at the title level with no unit sales
– revised footnote explaining that the monthly retail data reflects new physical purchases, not total consumer spend (digital, subscriptions, mobile games, rentals, used or social network games). The NPD Group will release a total consumer spend report to press on a quarterly basis
– monthly analysis from NPD industry analyst, Anita Frazier, will include software sales figures at both the sku and title level for various new releases

As per The NPD Group’s policy, NPD hardware and software subscribers are permitted to release sales figures for their respective products – a practice that NPD will continue to support.