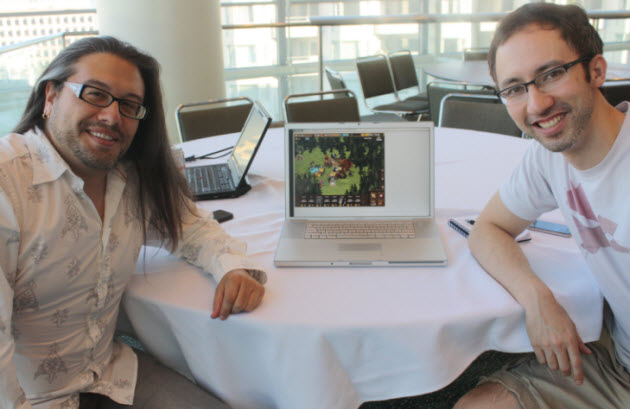 John Romero is the creator of the Doom and Quake games that have haunted the memories of a generation of gamers with over-the-top shoot-em-up violence. Now he is trying his hand at making a cute Facebook game called Ravenwood Fair. 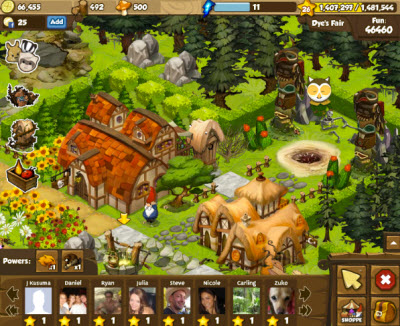 As a consultant to social gaming firm LOLapps, this kinder and gentler Romero (pictured, left) designed and built the game in the past couple of months with a team of eight artists and programmers. Ravenwood Fair debuts on Facebook today, and it is one more cog in LOLapps’ grand strategy to become a big player in social games.

LOLapps was going to launch the game last Friday, but it got held up by the Facebook police. Facebook pulled down all LOLapps games on Friday and restored them Sunday night, citing only “violation of Facebook’s policies.” The Wall Street Journal reported that some games, including LOLapps titles, were wrongfully transmitting user data to third-party companies. Of those companies, only LOLapps was singled out and shut down. LOLapps said it worked with Facebook to restore its games and will ensure it can protect users’ safety and abide by Facebook’s policies.

Hopefully for LOLapps, that will be enough for its users to flock back to its old games and play the new one as well. The privacy concern may spook some users, but odds are strong the bulk of users won’t care.

The new game uses the same underlying software as Critter Island, a major game that LOLapps launched a couple of months ago and that now has 1.2 million monthly active users.

As we noted in our previous story, LOLapps is one of the big Facebook social gaming companies that no one has heard about. That’s because most of its 150 million monthly active users are using the company’s platform to generate their own gifts and quizzes. These apps don’t show up in Facebook’s data as belonging to LOLapps; they show up under the names of the users. Nevertheless, that traffic is very important, said LOLapps co-founder Kavin Stewart (pictured, right) in an interview. That’s because LOLapps can use those simple quizzes and gifts to cross-promote its social games. The social games will likely monetize far better than the quizzes or gifts, allowing LOLapps to move up the food chain. 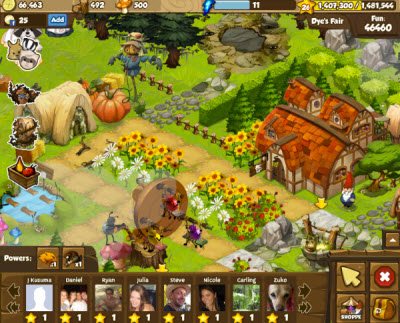 If the evolution proceeds far enough, LOLapps could join the upper ranks of the social game industry elite such as Zynga, CrowdStar, EA-Playfish and Disney-Playdom. That also means that the venture capitalists and investment bankers will come knocking on LOLapps’ doors. (The press and conference organizers are also paying attention: Arjun Sethi, chief executive of LOLapps, will speak on a case studies panel at our DiscoveryBeat 2010 conference on Monday).

To move up the ladder, Stewart says the company has to step up its game by tapping game designers such as Romero, and its creative director Brenda Brathwaite, a longtime video game designer who also migrated to social games.

Romero himself has been an evolving character. He was a co-founder of id Software (alongside John Carmack, Adrian Carmack, and Tom Hall) and a designer of many legendary video games such as Wolfenstein 3D, Doom, and Quake. Those games introduced the hyper-violent first-person shooter genre to the world in the 1990s and changed video games forever. Romero left id and worked at a series of game startups: hardcore game maker Ion Storm, mobile game maker Monkeystone Games, and Slipgate Ironworks, a studio that has become part of Gazillion Entertainment. He never quite recaptured the magic of the creative maelstrom at id Software. But he has sustained a long career in games and crossed many different genres over time. 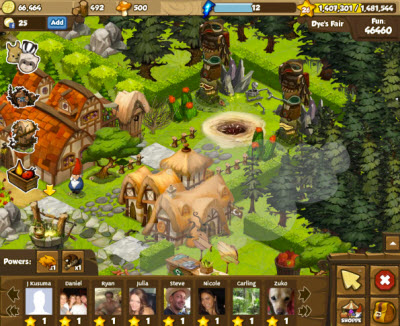 In an interview, Romero said that his broad experience helped him prepare for his latest project. He is still employed at Gazillion, where his major MMO game was canceled, and is consulting for LOLapps. But if his first Facebook game works out, LOLapps will no doubt be happy to bring him aboard full-time, Stewart says. As Romero demonstrated his cute game, I couldn’t help but interrupt and ask, “Are there any shotguns in the game?”

“There are no shotguns,” he said. “We’re talking about Facebook here.”

But Romero thinks that Facebook gamers — many of them older women — are more than ready for deeper games. He points to FrontierVille, which was designed by Zynga’s chief game designer, Brian Reynolds, another veteran traditional video game designer. Romero believes that game developers with the depth of experience of Reynolds will be able to meet the rising expectations of Facebook’s gamers.

“I knew when the game developers moved into social games it would get more gamed up,” he said.

In Ravenwood Fair, you start out in a forest and meet a raven named Huginn, who teaches you how to play. You follow the yellow arrows and begin clearing space in a fairy tale forest. Your goal is to build a Renaissance fair in the clearing. But there are mythical monsters hidden in the forest, and the trees themselves have a will to take back the land as theirs. These forces conspire to contain your carnival and scare your guests. You have to build sentinels to protect the fair, comfort your guests and, above all, you have to keep chopping wood. Stewart said he liked the design because it brings real dramatic tension to Facebook gaming. 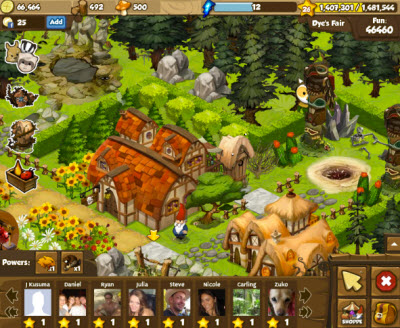 The characters are cute, and the game includes some potty humor. You can build an outhouse called Thunderbox (an Australian term for a toilet). Among the ambient forest sounds, you occasionally hear the flushing of a toilet. With LOLapps’ Critter Island engine, the game can fit lots of two-dimensional characters on the screen at once, despite the slow Flash animations that run on Facebook’s feeble graphics platform. Also pulling from his game developer experience, Romero infused the game with a lot of inside jokes and a long and continuous narrative story. There is no combat in the game, but as it progresses you run into more and more enemies from the forest. The graphics and sounds hint that not all is right with the environment. The game could have 40 different levels or more as the team keeps upgrading it.

The game bears a little resemblance to Zynga’s FrontierVille, where you chop wood and build a farm. But it is an original story and has a greater palette of sounds than most Facebook games. It took Romero and his handful of people about two months to make it. If it succeeds, they will continue to expand the universe of Ravenwood Fair. Romero said he could get addicted to this kind of small-scale, craftsman-like game development. By contrast, making console or huge PC online games can take scores or hundreds of employees, years of work, and budgets in the tens of millions. That kind of development isn’t fun, nor is it sustainable, Romero said.

And Facebook games promise developers more than just lower overhead, Romero said. “More people could play it than would ever play an MMO. Facebook is an amazing platform.”

I asked Romero if anyone had teased him for not making a macho hardcore game. Not so far, he said, and he started branching out into cute content when he made mobile games anyway. Perhaps, one day, he’ll be known for something other than Doom or Quake. Ravenwood Fair is just about to launch. If it succeeds, video game pioneers such as Romero may find that they’re going to be very welcome contributors to the social gaming industry.