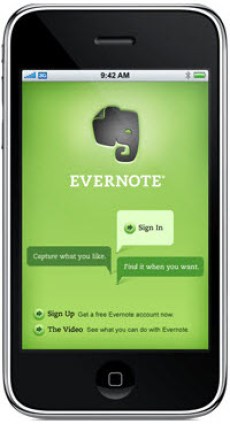 Evernote, the startup dedicated to helping the world remember everything, announced today that it has raised $20 million in third round funding led by new investors Sequoia Capital.

The service — which offers desktop, mobile, and Web applications to save notes, pictures, audio, and video to a readily accessible cloud location — has been growing like gangbusters. In the past two months, it’s signed up 10,000 new users every day, and has grown to more than 4.7 million users in less than two and a half years. Revenue from its premium subscribers ($5 a month or $45 a year for more features) has risen to the point where it can fund Evernote’s day-to-day operations.

In a blog post, Evernote CEO Phil Libin makes it clear that the money will go directly towards expanding the service. The funding will help the company improve the service in ways “that would have taken years to achieve organically.” Libin continues: “. We’ll build more features, add more devices, fix more bugs, expand into more countries, and make Evernote indispensable to more types of users (including corporate and educational folk).” He says that the company will combine today’s  funding with the $9 million from its second round last year and “put it all back in the product.”

Sequoia’s Roelef Botha, who served as PayPal’s CFO and backed YouTube and EventBrite as a venture capitalist, will join Evernote’s team as an advisor and board observer.

Speaking in grander terms, Libin says that the company is going to grow from a service that helps you remember everything to a “global platform for human memory.” Evernote’s goal is to become the “trusted, permanent, and ubiquitous destination” for your lifetime memories.

As a longtime user of the service, Evernote has effectively become my primary digital scrapbook. Now that it’s a well-known property among tech-savvy users, the company would do well to attract general users who may need a bit of memory augmentation of their own.

Earlier this year, Evernote introduced an app store called Trunk, which now contains over 100 apps or add-ons that can extend the functionality of the service.

Based in Mountain View, Calif., Evernote has raised a total of around $45 million with today’s funding. Existing shareholders, a group which includes Morgenthaler Ventures, DoCoMo Capital, and Troika Dialog, will also participate in the round.