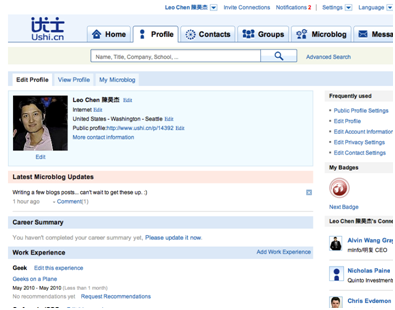 Ushi.cn is looking to capitalize on the fast growing social networking space in China with its own flavor of LinkedIn targeting Chinese professionals.

Shanghai-based Ushi (pronounced: you-shi meaning ‘outstanding professional’) launched its invitation-only private beta in March 2010 and has grown to over 60,000 members from user invites alone. That’s a pretty small number compare to LinkedIn, which has 80 million users.

But in a country that’s seen the majority of its growth to 350 million internet users (larger than the US population) in  the past decade, it’s hard to argue that a professional social network can be a lucrative business opportunity. For comparison sake, LinkedIn is expected to generate $200 million in 2010 revenue.

Today, roughly 70 percent of Ushi’s users are active monthly and 80 percent of visitors are in China. Most of the strong organic growth can be attributed to Ushi’s ability to attract an impressive list of Charter Members which includes some of the most influential individuals in China’s tech and finance industries.

Charter members act as advisors, many of which collaborate frequently with the Ushi team. Bill Liao, former co-founder of Xing.com, a German based LinkedIn of sorts boasting 9 million users and $62 million in 2009 revenue, is also a Charter Member.

The company was founded by Dominic Penaloza (Chinese: Hansen Lu), Yue Zhang and Jinfu He in 2009. I met Penaloza and Zhang during the Geeks on a Plane tour in May. Prior to Ushi, the team had been working on WorldFriends.tv which is an international language exchange community for foreign travelers to meet new friends (read: dating site). WorldFriends has a sizable user base in both Japan and North America, attracting 2mm users a month and generating annual revenues in the low-to-mid 7-figures according to Dominic.

The site is available in both English and Chinese. As you can see from the screenshot, Ushi employs some of the same core functionalities as LinkedIn. User profiles focus on work experience and connections to others are mapped out by degrees of separation.

Some key differences are the site’s emphasis on its microblog and groups features. An iPhone app is also available in Chinese. Although LinkedIn does have its own microblogging service dubbed ‘Activity’, it is much less prominent. Ushi’s homepage is more reminiscent of Twitter where users are encouraged to share status updates and comment on their network’s activities.

Groups on Ushi facilitate face-to-face meet-ups formed around common interests whereas LinkedIn users use groups as mostly a newsletter channel. According to Frank Yu, (Founder of Shanghai based Kwestr): “Ushi’s groups are more about getting people to actually meet with shared goals and interests… it [Ushi] was built for the Chinese community first in both user interface as well as supporting formal and informal social networking among Chinese. So if you look at it, its primary focus is China while LinkedIn seems to try to accommodate everyone.” 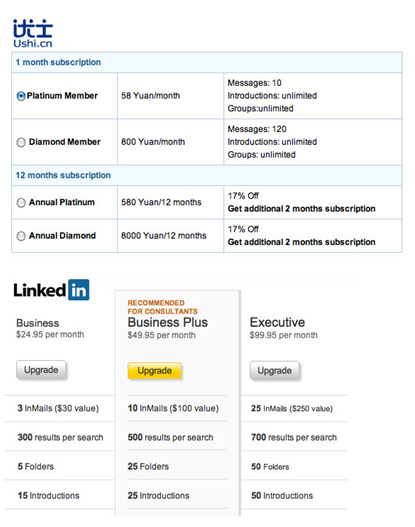 Ushi’s business model appears similar to LinkedIn’s. Users pay 10 Ushi Coins (valued at 10 Yuan, or ~$1.50) to send messages to users outside of their network. A subscription model is also available starting at 58 Yuan (~$8.50) for 10 messages/month and unlimited introductions – a much better deal than LinkedIn by comparison. You can also earn additional Ushi Coins by completing your profile or inviting users.

Penaloza said: “We plan to test various revenue streams to find out what really resonates well with our users. We see huge opportunities in e-commerce and recruiting/jobs. Business magazines have already dubbed us ‘China’s Linkedin,’ and that’s a convenient short description, but we are planning some exciting innovations that we believe make Ushi not a so-called clone but instead something even better.”

I wouldn’t be surprised to see them integrate e-commerce and recruiting given Bill Liao’s experience at Xing.com which primarily makes money from contact messaging, job boards, and e-commerce and special offers. There’s also a FourSquare-like badge system for various achievements such as ‘Expert Networker’, ‘Discussion Leader’, etc.

Will a LinkedIn of China work? The site sports a large number of expats and English-speaking users working for multinational companies, many of which already have LinkedIn profiles. The incremental utility of the site is arguable. However, as more Chinese locals join and the community aspects begin to take shape to fit the culture, expats in China may use it as a primary tool to connect with locals.

Zhang assured me that, within Ushi, the local Chinese community is growing much faster along with conversations and connections between users. Critics have suggested that Chinese business people are uncomfortable sharing their contacts, which could present a challenge for Ushi’s growth.

I’ve actually witnessed this first hand back in May when I visited a Beijing startup building workflow tools for Chinese lawyers. To my surprise, even attorneys working in the same firm do not share their contacts or case details. Most operate as largely independent practices and form large practices simply as a way to show size and credibility.

However, if anyone will succeed in creating China’s LinkedIn, Ushi has a good chance. The space isn’t hyper-competitive and filled with clones like most other western successes. TianJi.com is the primary competitor to Ushi but hasn’t gained significant traction and Ushi appears to be closing in on them in terms of traffic. 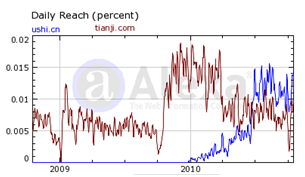 LinkedIn’s presence in China is also weak with no apparent Chinese language version of the site.

History has shown us, that Western companies (e.g. Google, eBay, Yahoo) entering China usually have a tough time surviving against local competition largely due to the lack of an existing network and cultural understanding. With the rising young generation of Chinese internet users (average age of 29 vs. 42 in the US) and a growing comfort level to share information online, the question isn’t if a LinkedIn of China will take shape, but when.