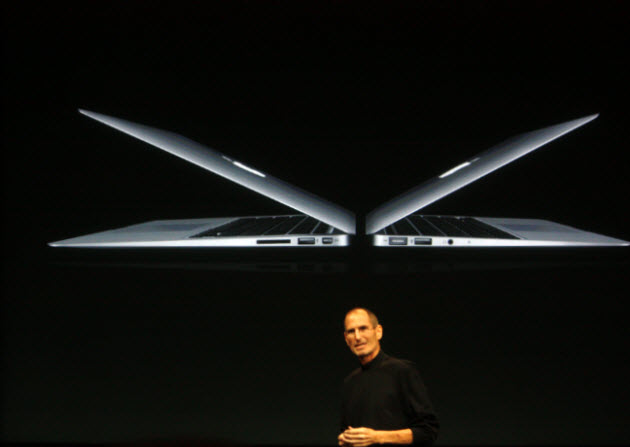 For his signature “one more thing” unveiling at Apple’s “Back to the Mac” event today, Apple chief executive Steve Jobs revealed two new versions of the company’s MacBook Air laptop.

The new laptops are just 0.68 inches thick at their thickest part and 0.11 inches at the thinnest. They come with flash memory only, not hard drives, and sport fast new Core 2 Duo microprocessors from Intel as well as Nvidia mobile graphics chips. With no hard drive, the laptop can turn on instantly; there is no waiting for the machine to boot up. The lack of the hard drive made it easier to make the MacBook Air smaller than its original 17-inch model.

At $999, you can get an 11.6-inch version (2.3 pounds) of the MacBook Air. The 13.3-inch (2.9 pounds) starts at $1,299. They are available today. Prices go up for machines with faster processors or more storage. You can get up to 256 gigabytes of flash storage. The 13.3-inch version has seven hours of battery life while cruising the web wirelessly; it has 30 days of stand-by battery life. The 11.6-inch version has five hours of battery life while cruising the wireless web. The iPhone’s FaceTime video phone app will also be available on the MacBook Air.

Apple’s big secret of the day was hinted at before, but the fact that there are two new models was a surprise.