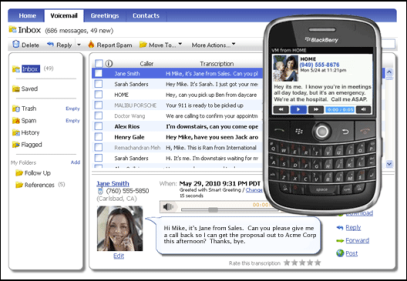 YouMail, a startup that provides next-generation voicemail services like visual voicemail, voice-to-text transcription, and custom greetings, announced today that it has reached a new milestone with 15 million unique monthly callers.

That number represents “five percent of the U.S population’s phone system,” the company says. The average YouMail user in the U.S. gets 50 or more calls that they can’t answer — a sign that users also trust the service to accurately deliver their messages. Altogether, YouMail users log more than 45 to 50 million hours of missed calls every month.

In addition to iPhone-like visual voicemail, YouMail users can also share voicemails with others, as well as choose to block specific callers. Premium services include human transcription for accurate voice-to-text, as well as “pro” accounts which offer more features than the standard YouMail acccount. The company offers free iPhone, Android, and BlackBerry apps, as well as a $399 app for Palm webOS phones. YouMail’s service works across all major carriers, including AT&T, Verizon, T-Mobile, and Sprint.

A service like YouMail is only bound to grow as users become more demanding of their voicemail features. Services like Google Voice already offer free call redirecting, transcription, and call recording, but not all of those features are available without getting a new phone number from Google.

Founded in 2007, YouMail is based in Aliso Viejo, Calif. The company previously landed $4.5 million in funding from VantagePoint Venture Partners, and it tells us it recently added $400,000 to a newer round. We’re awaiting details on the source of the new funds.