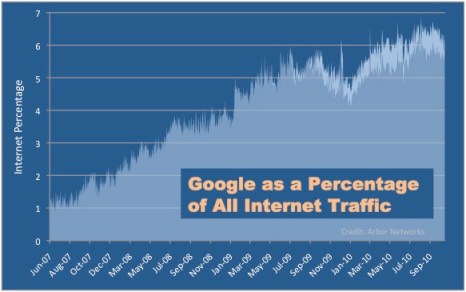 Traffic across Google sites broke a new record this month and now accounts for an impressive 6.4% of all Internet traffic around the world, according to a tally by network security firm Arbor Networks.

The tally included all Internet sites owned by Google, namely its main Google.com search engine, YouTube, GMail, Google Maps, Google’s office suite of products like Google Docs and Spreadsheets, and others. One expects a major contributor to the statistic to be its juggernaut video-sharing site YouTube, which transmits an average of 24 hours of video every minute according to an estimate by Website Monitoring.

Since January, Google’s site-wide traffic has gained a whole percentage in Internet traffic share, the firm estimated, adding that it would be the second largest Internet Service Provider in the world if it were to operate as one.

The company has said in the past that long-term increases in Internet and mobile users ultimately help its traffic at a large scale, claiming that this is one of the factors that has led to its decision to enter the mobile market with Android. It has also shown initiative in building its own gigabit fibre network, which, were it to transpire, would also interestingly crystallize the company as an official Internet Service Provider.

The tally, which was obtained through more than 110 ISPs in 17 countries, comes after Google announced a record 2010 third-quarter revenue of $7.29 billion earlier in the month, up 23% from last year.