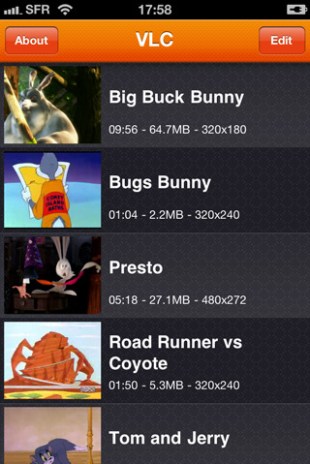 Forget about the slog of converting video files to play on your iPhone. The VLC Media Player app, which was first released for the iPad in September and lets you play practically any video file, has been updated today to support the iPhone and iPod Touch.

The app is an extension of the VideoLAN project, an effort to develop free media software that can play any video file format. Instead of dealing with multiple video and audio codecs (software that lets you interpret various file formats), VLC on desktops allows users to play videos worry-free. The iPhone OS app brings that convenience to the Apple’s mobile devices.

Previously, media-addicts had to convert their video files to an MPEG-4 video format to play on the iPhone — a process that could take hours depending on the size of the video and your computer’s horsepower. Now you can simply drop any video file — including Divx, Xvid, and Matroska (.MKV) formats — onto your iPhone via iTunes.

I tried a variety of video files on my iPhone 4, and they all played flawlessly. The software still has a few hiccups when it comes to larger high-definition files — but those aren’t ideal for the iPhone’s limited storage space anyway.

The VLC app only works on the iPhone 4, iPhone 3G S, and the latest generation of iPod Touch. There’s no word on an Android version yet, but given that the VideoLAN project is open source, I suspect it will be coming soon.