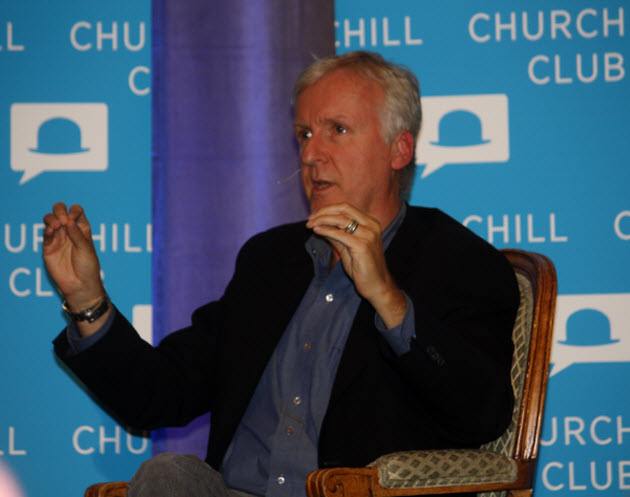 Director James Cameron said that he believes stereoscopic 3D, like the kind in his blockbuster film Avatar, will eventually become pervasive, but a lot of things have to fall into place first.

“Well, we see the world in 3D,” Cameron said at the Churchill Club dinner Wednesday night in San Jose, Calif. “To me, there are no barriers to 3D TV in homes in five to ten years.”

In a conversation with Google chief executive Eric Schmidt, Cameron said the technology will migrate from movie theaters to living rooms, but not nearly as fast as everyone would like. Five or ten years may be a short time to a patient visionary like Cameron, who worked on Avatar for 12 years and invented many 3D technologies in the course of the film. But to consumer electronics companies making 3D TVs now, it may be a long wait before the big revenues start coming in.

That’s because the current 3D technology for homes — while pretty good — isn’t good enough. Cameron said that “auto-stereoscopic” technology is the way to go. That means that technologists have to develop 3D TVs that you can view for hours at a time without headache-inducing 3D glasses.

The best-quality 3D TV sets are hard to make because they have to present dual images on the screen that can be synthesized into a single 3D image by the viewer. That means the user has to be in an exact “sweet spot” to see the images perfectly. The TV sets will also have to have multiple sweet spots so that multiple viewers will be able to see the 3D images from different angles. Those TVs will need to have considerably more processing power in order to create those sweet spots, Cameron said. That’s because a 60-inch screen will have to have more pixels in a given area that can be decoded properly for the different viewing angles. So every speck on the screen will have different data for you to see, depending on where you’re sitting.

“The sweet spots subdivide the total resolution of the screen, so breakthroughs have to happen in display manufacturing,” said Cameron, who invented many of the 3D camera technologies used to make Avatar over the course of 12 years.

The good thing is that the technological improvements delivered by Moore’s Law (based on the prediction by former Intel CEO Gordon Moore that chip capacity would double every couple of years) will be enough to make such TVs possible. But it may be four or five years before that can happen, Cameron said.

“I’m sure you’re the only person in Hollywood that actually understands Moore’s Law,” Schmidt said.

Cameron praised consumer electronics companies for getting out in front of the trend with their current 3D TV models, but he said they are early. Those TVs have much better images than past TVs and they use good quality “active shutter” battery-operated glasses. But it’s still hard to sit for hours at a time wearing those glasses.

An even bigger problem is the lack of 3D content. Avatar set the standard for good 3D in films, but most content makers still have to learn how to produce good 3D content. That is only beginning to happen with new 3D TV channels and TV shows and movies.

Sports and video game programming will be the first types of content to take off in 3D, and then the rest will follow, Cameron said. Schmidt said that new 3D content authoring systems will also have to be created to allow game developers to create their content without big hassles. That’s another barrier standing in the way of quick adoption.

Cameron himself remains committed to producing cool 3D content. He announced today that he will begin production on the first of two sequels to the Avatar movie starting in 2011. It will likely be 2014 before the second movie debuts and 2015 for the third movie. Cameron’s talk is available for viewing for a fee on Fora.tv.