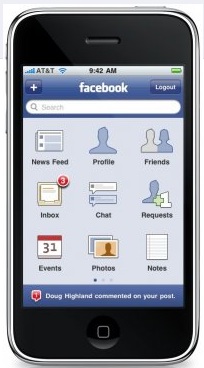 With a new single sign-on feature, Facebook aims to become the way users log into all their mobile applications. It’s already doing this to some extent, by allowing users to log into non-Facebook websites using Facebook Connect, but the company’s mobile chief, Erick Tseng, said the goal here is to make the process as simple as possible on phones, where typing in user names and passwords can be a huge pain.

After users have logged in to the Facebook app, they can use Facebook to log in to partner apps without any typing. When users open a partner app for the first time, they just tap a “sign-in with Facebook” button, tell Facebook that they authorize the app, and skip the login process.

Facebook has been saying for a while now that its strategy on mobile phones goes beyond the Facebook application and that it wants to become the “social layer” for any mobile application. So the single sign-in feature is the first step to making that vision a reality.

Facebook also announced new application programming interfaces (APIs) that will give mobile apps greater access to their users’ Facebook data. For example, location service Loopt will be able to pull in check-in data from Facebook Places, so it can tell users not only where their Loopt friends are, but also where their friends have checked in on Facebook.

These new features should be available to users and developers on Android starting today, Facebook said, and on the iPhone in about a week. Neither of these additions may make a huge difference to users initially — but again, they play into Facebook’s broader strategy of turning your Facebook account into your social identity wherever you are, whether it’s another website or another mobile app.

On the privacy front, the news today doesn’t seem hugely significant, but I still expect some complaints when users start seeing Facebook data showing up in other apps.

Zuckerberg also spoke today about what Facebook’s strategy does not involve. He said people may have heard rumors that Facebook is building is phone — in response, he chuckled and said, “No.”

You can read more about the announcement on the Facebook blog.