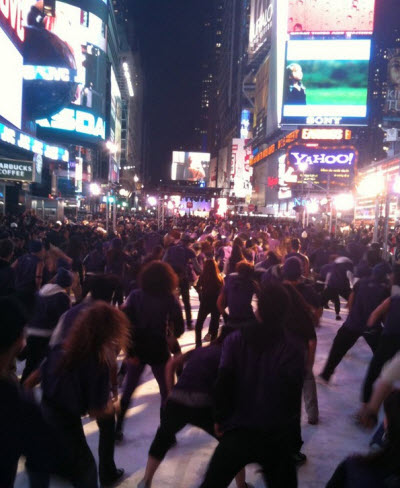 Hundreds of professional dancers were bumping and grinding in honor of Kinect’s big game, Dance Central from MTV. The launch is part of a marketing campaign aimed at snaring mass market consumers who play games casually. So far, those gamers have flocked to the Nintendo Wii, while Microsoft has drawn the hardcore gamers with its Xbox 360. If Kinect is a big hit, then that could change. Nintendo, whose Wii sales have been sinking for months, will finally be on the defensive.

Just minutes ago, Mattrick sold the first Kinect system to a guy named Peter (pictured at the bottom), who had been waiting for days outside the Toys ‘R’ Us store in Times Square. At the same store, Microsoft previously launched the Xbox in 2001 and the Xbox 360 in 2005. The big hoopla in Times Square is part of a $1 billion marketing blitz to promote Kinect and Windows Phone 7 cell phones, which go on sale on Nov. 8. 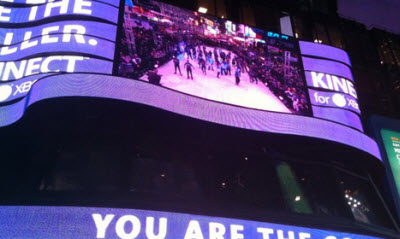 At $149, Kinect is much less expensive than a brand new console. But it has a chance to deliver a completely new experience for users. Microsoft has integrated Kinect with its Xbox 360 dashboard. You can navigate through the console menu and select films with a wave of your arm. You can use body motion to fast forward or rewind a streaming movie. You can also use Kinect to make video chat calls.

Much like Wii games, Kinect titles will get gamers off the couch and performing activities that will leave them exhausted. Dance Central offers the magical experience of letting you use your body to mimic an animated dancer on the TV. If you do a good job, you score more points. The system works well whether you’re an expert dancer or a neophyte. If you want to exercise, 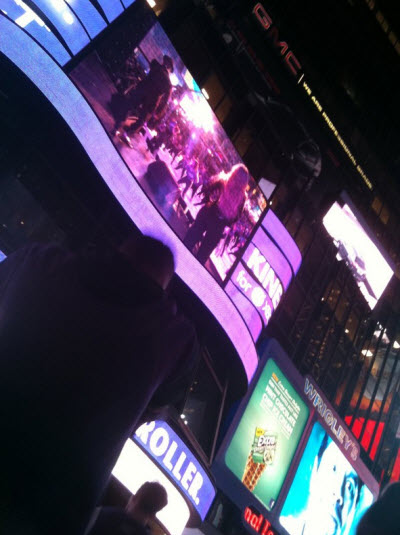 you can play Ubisoft’s Your Shape fitness game. Whatever game you play, you’ll likely have an audience watching you on the couch, as Kinect has a strong family draw. I’ve played both of those games and am betting they’ll be among the most popular titles on the Kinect among the couple of dozen that are available at launch.

Larry Hyrb, also known as Major Nelson, Microsoft’s in-house blogger, has been tweeting like mad and posting pictures from Times Square such as the ones in this post.

The initial reactions of the first purchasers will be important, since they will be the first to test Microsoft’s design decisions with Kinect.

Sony launched its PlayStation Move in mid-September to lukewarm reviews, but the company claimed it had strong sales, shipping 1 million units in a month.

The Move controller has a wand-like device that you hold in your hand. It is more accurate than the Wii, which tracks you via infrared scans, an accelerometer, and a gyroscope (the latter is in the special Wii Motion Plus controller add-on).

The Move has an accelerometer and a gyroscope in its handheld controller. But it also has a two-dimensional camera, which tracks your body shape as well as an 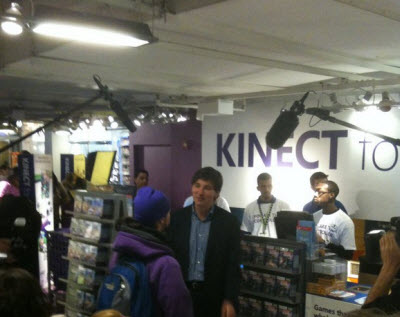 LED light attached to the end of the wand. Richard Marks, co-creator of the Move, told us in an interview that Sony considered the 3D camera that Kinect uses, but rejected it on the basis of cost. (That’s why Sony can sell its Move controller for as little as $49, or $99 with a camera).

Besides using a novel 3D sensor, which captures an image of a room in three dimensions and then translates the location of objects in the room to the console, Microsoft also added a near-infrared sensor to detect motion in any kind of lighting.

With the expensive 3D camera on board, Microsoft chose to keep costs down by not putting a processor into the Kinect system itself. Instead, the system relies on the Xbox 360’s processor, which can put a strain on the overall system and make it harder to play truly hardcore games at the same time you’re using Kinect.

The verdict is still out on whether Kinect games will be as accurate as Sony’s Move games. Remember, with Kinect, there is no controller or even buttons in the user’s hands. But Kinect game designers may be able to design around the limitations of the system so that users don’t notice.

If Microsoft truly succeeds with Kinect, it will finally have its mojo back. With failures such as Windows Vista and its weakness in phones, Microsoft has ceded the aura of making magic products to companies such as Apple.

And Microsoft chief executive Steve Ballmer says that motion-sensing technology such as Kinect will likely become the user interface for all sorts of electronic devices, from TVs to computers, much like Apple’s touchscreen user interface has become the heart of smartphones and tablet computers. If that comes to pass, Ballmer and Microsoft’s investors will be the ones dancing.