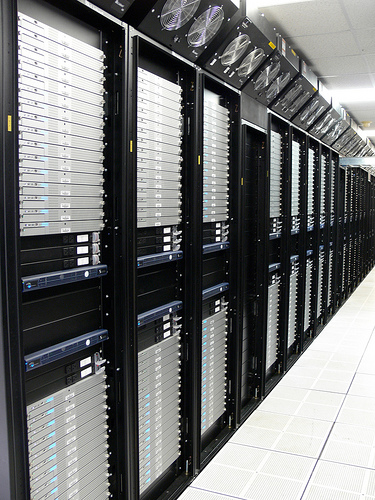 Apple is getting out of the server room, sort of. The company announced today that it’s dropping the Xserve rackmounted server, but at the same time it’s also introducing a new Mac Pro Server configuration.

Apple will accept orders for Xserve until January 31, 2011, and says it has no plans to develop future versions of the server. The company will continue to ship the server’s hard drive modules until the end of 2011.

Apple won’t be leaving current Xserve customers high and dry, though. AppleCare warranties will still be honored, and the company says it has repair parts for up to seven years in California, and five years elsewhere in the world.

Xserve was Apple’s only rackmounted server — a system that could be stacked in server room racks. The form factor allows administrators to easily sandwich significant amounts of hardware together in tight spaces (Virgina Tech relies on Xserve for its world-class System X supercomputer).

In its Xserve Transition Guide (embedded below), Apple recommends that users adopt its new Mac Pro Server configuration, or its Mac mini server. The Mac Pro server is slated to ship in a few weeks with a $2,999 base option that features a quad-core Intel Xeon processor and 8 gigabytes of RAM

While it would seem that Apple has effectively pushed itself out of the traditional server room, it offers some suggestions on how users can fit the Mac Pro and Mac mini into server racks. The Mac Mini’s thin profile allows it to fit in a single rack unit (or 1U of space), and they can also be stacked side-by-side to fit two units on one rack. That’s certainly better than the alternative — the Mac Pro takes up 12 racks of space, according to Apple.

With XServe on its way out, it’s also unclear what role, if any, the server will play in Apple’s upcoming North Carolina datacenter. In job postings for the datacenter, Apple says that it will run “MacOS X, IBM/AIX, Linux and SUN/Solaris systems.” So even if XServe systems are part of its infrastructure, it likely won’t make up a significant chunk.

I don’t suspect too many server administrators are going to jump at the chance to throw in Mac Pros or Mac Minis in their setups, but the addition of the Mac Pro Server configuration may be useful to some. The news of Xserve’s demise is certainly a reminder that, despite Apple’s recent iPad and iPhone success with business users, it can’t quite compete with the likes of IBM or HP in enterprise server rooms.