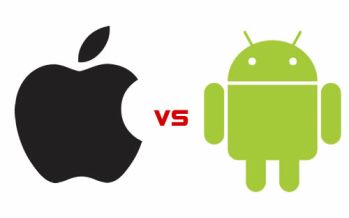 This story was contributed to VentureBeat by Paul Grim, a General Partner at venture capital firm SunBridge Partners. Grim blogs on wireless issues at Grim Times.

For the better part of 20 years, Mac lovers fumed in frustration as Apple languished in sub-5% PC market share territory. Wintel dominated. Big, ugly, buggy, clunky, and everywhere. It seemed as if graphic designers were the only people stubbornly refusing to admit defeat and join the rest of the planet in using Windows.

But then Steve Jobs came to the rescue — and over time, people actually started buying Macs again. And then the iPod! and iTunes! Somehow Apple found a way to reinvent and completely dominate an entire category of consumer electronics. The company seemed to change overnight — and became the leading-edge technology giant it always knew it was supposed to be.

And then the iPod begat the iPhone – and lo, the consumer beheld it and said it was good.

Windows Mobile, Symbian, Brew, RIM, all the closed-deck nonsense pushed by the carriers — they were the dinosaurs in the path of the iPhone asteroid. Even AT&T’s awful network couldn’t stop the juggernaut. Apple had irreversibly changed the wireless industry, for the better.

And then onto Apple’s coattails stepped the Google.

When Google bought the little startup Android in 2005 and eventually launched it into the market, people were extremely skeptical. Previous Linux-based and open platforms had failed miserably, and why would developers want to work on Android when there were already 100,000 apps in Apple’s App Store and growing?

Then HTC and Motorola latched onto Android in a big way (the former to come out from the white-label shadows, the latter to get its mojo back). Droid, Hero, Desire, Droid Incredible, Droid X — all of a sudden it was like a veritable Jawa swap meet. Yes, the Android market was a scatty mess, the apps were fewer and barely legal in some cases. But Android was getting ready to take over.

Back in January I pointed out that Google’s Nexus One was not a big deal, but Android was; Nexus was the concept car, not the iPhone killer. Some believed Android would win because the iPhone was chained to AT&T, whereas Android wasn’t chained to any network. This was partly right, however it goes far beyond that. Once it was clear that Android was building a critical mass, handset OEMs saw their chance to beat Apple and stay relevant. The smartphone segment suddenly had exploded — up to 50% of all new shipments were now smartphones, and in another year it will be closer to 100%.

You may laugh at that last statement, but it is more likely to happen than not, and all because of Android. I realized this when I saw the LG Optimus, an Android smartphone now on T-Mobile for $30. Thirty bucks for a smartphone. Remember when the Motorola RAZR became ubiquitous? It wasn’t popular at the start when it cost $300, but when it became cheap it was everywhere. 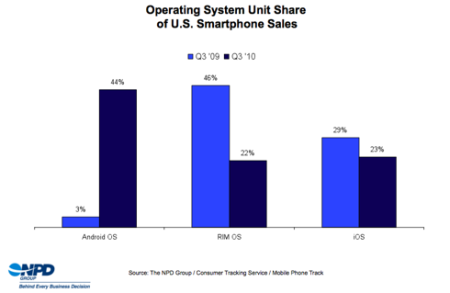 Apple may certainly come out with a very low-end iPhone; the company is indeed incredibly adept at segmenting markets with 2-3 different versions of a product and relentlessly driving down prices on all of them. But will Apple ever have 20 versions of the iPhone? 50? Of course not. Will it ever license the platform to OEMs? Are you kidding me? This is why Android will completely dominate the wireless world. It is spreading like a virus throughout the ecosystem as you read this (see chart above). Apple will always be the Maserati of smartphones — leading-edge, trendy, stylish, downright awesome. But Android will be the Ford Taurus — maybe a little dull in comparison, sometimes clunky, but dependable, cheap and everywhere you look, just like Windows in the last Apple Holy War (except for the dependable part).

Mobile app developers don’t necessarily have to choose between these platforms, and mostly aren’t. It’s a far cry from several years ago when you’d have to port your app to dozens of different handsets — now just 2 or 3 platforms and you’re done. However, if you had to prioritize your focus, Android in the long run is the right place to be. Apple’s distribution platform is much better currently, but the numbers game is more important. If you want ubiquity, sell to Ford, not Maserati.