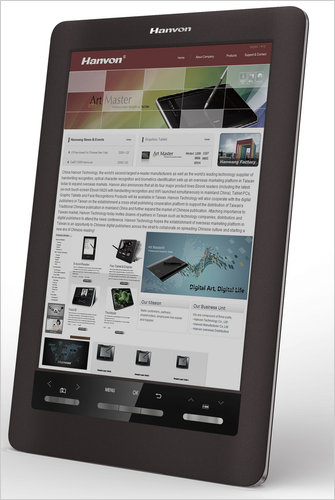 Hanvon, China’s largest e-book manufacturer, will be debuting the first device to use a color E Ink display on Tuesday, according to a report by the New York Times.

The company will be demonstrating the color e-reader at the FPD International 2010 trade show in Tokyo, which is dedicated to flat panel display technology. In doing so, Hanvon will beat out Amazon’s popular Kindle e-reader, which is still stuck with a black and white E Ink display. Meanwhile, Barnes and Noble ended up relying on LCD technology for its recently announced Nook Color.

But don’t expect Hanvon’s color device to beat the iPad just yet. The New York Times reports that the colors are muted, “as if one were looking at a faded color photograph.” And like all E Ink displays, it can’t handle full motion video since the screen refreshes at a slow rate. Still, it will be able to offer killer battery life (e-reader battery life is measured in weeks) and full readability in sunlight — unlike LCD screens.

Color E Ink displays have been talked about for years, but until now they haven’t made it to consumers. Hanvon’s color display was achieved by laying a color filter over the standard black-and-white E Ink panel, so it offers the same battery life as existing e-readers. The color filter does reduce the screen’s brightness, which will likely be a worthy compromise for many consumers.

Both Amazon and Sony are apparently waiting for color E Ink displays to mature before they jump on the technology. “There’s no question that color is extremely logical. But it has to be vibrant color. We’re not willing to give up the true black-and-white reading experience,” Sony e-reader president Steve Haber said to the NYT.

Hanvon plans to release its first color E Ink reader — which features a 9.68-inch display — in China this March for around $440. The company says it may bring the device to the US — it already sells its products through the web and Fry’s Electronics stores.

At this point, Amazon must be feeling the pressure. The company’s $139 third-generation Kindle has been selling like crazy, but now that it’s facing color competition from China, it will likely need to step up its color plans for the Kindle.