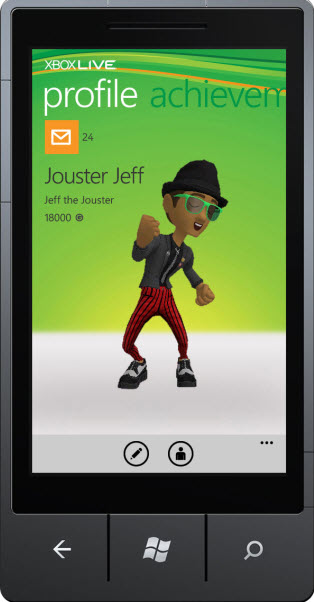 Microsoft is launching its Windows Phone 7 software today on nine new smartphones from Dell, HTC, and Samsung. One of the key features is the ability to access your Xbox Live account via the phone’s menu.

Xbox Live has its own hub within the phone’s user interface. That’s important because it differentiates Microsoft’s Windows Phone 7 phones from all the others in the market now, including the iPhone.

You tap on the Xbox Live icon and it takes you to your Xbox Live account avatar, or character, with your gamerscore number and gamertag name. You can view the library of games you have on the phone, including Xbox Live-enabled titles, as well as recommended “spotlight” titles. In that respect, the Xbox Live feature is great for discovering new content.

On top of that, you can download a new feature called Xbox Live Extras, which will let you edit your profile or change your avatar’s clothes to anything else that you have in your avatar’s closet on your Xbox Live account. You can see what your friends are doing and what they are playing. You can compare achievements with anyone on your friend’s list. And you can send messages to anyone in the Xbox Live community via Xbox Live text messages.

Microsoft plans to release new games in the Marketplace section of the phone each week at prices ranging from $2.99 to $9.99. Be sure to check out our review of Windows Phone 7.