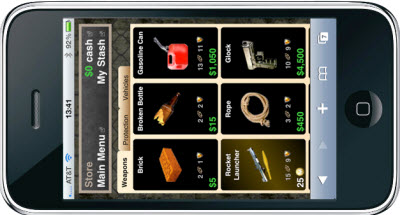 MocoSpace recently launched an effort to create mobile games that run on web browsers. The Boston-based company is announcing today that its first social game, Street Wars, has become a big hit and is generating good money for the company.

As such, MocoSpace contends that the game’s success shows that its social game platform — which is open to third-party developers to adopt — is off to a good start. MocoSpace is distinguishing itself by supporting games written in HTML5 as browser-based games, not apps that are downloaded to a phone and run natively on it.

MocoSpace argues that creating a browser-based game allows a developer to hit many different smartphone platforms. That saves on the laborious process of creating a game for one smartphone and then porting it to other phones one at a time.

The Street Wars game lets players gain money, power and access by completing dangerous missions and head-to-head fights. They are rewarded with points to improve their health, stamina, energy and income. To improve their characters, users can get virtual money, Moco Gold, by spending real money. In October, the game was played by 500,000 unique players, and 4 percent of those spent money on Moco Gold. About 50 percent of the players played the game daily. And the average revenue per user for the game on Android and the iPhone is $13. Overall, MocoSpace’s games were played 15 million times in October.

The company says it is adding developers to its game platform, but it isn’t ready to announce any names yet, said Casey Jones, the company’s vice president of music and marketing.

“Our approach was to use our social game features in our own game first and prove to the community that it works,” Jones said. “We can now take the engagement data, work with key developers and then eventually open the platform up to third parties.”

MocoSpace was founded as an entertainment destination on the mobile internet in 2005 and has more than 15 million registered users who view about 3 billion pages a month. Its backers include General Catalyst and Softbank Capital. Rivals include Ngmoco, Aurora Feint, Scoreloop and Papaya Mobile. MocoSpace has 34 employees and has raised $10.5 million.