Comcast got into the social TV game in June with the launch of a new service called Tunerfish. Today, the company announced a bunch of upgrades that general manager John McCrea said should lead to more sign-ups and growth.

Tunerfish was developed by team members from Plaxo, which was acquired by Comcast in 2008 — McCrea was Plaxo’s vice president of marketing, and Tunerfish product director Nida Zada was Plaxo’s director of user experience. Through the Tunerfish website and the iPhone application, users can share what they’re watching on television, see what’s trending among their friends or the general userbase, and earn rewards.

When I asked about Tunerfish’s numbers, McCrea didn’t give a specific user count, noting that it’s still a new product, but he revealed that the number of “shares” increased 500 percent between July and October. And its users are loyal — 10 percent of them return to the website or iPhone app seven days out of seven.

One of the big changes revealed today is a new look. Tunerfish ditched the boring text-only logo and worked with the Liquid Agency marketing firm to design a cute fish mascot, which you can see in various guises above. And the website has been redesigned with what the company says is a cleaner look. That look is also reflected in an updated version of the Tunerfish iPhone app that just went live.

“This really surprised us, but almost all of our low ratings in the app store were around that issue,” McCrea said.

Comcast isn’t the only company interested in this area. For example, a Google Ventures-funded application called Miso also allows users to “check in” to their favorite TV shows. 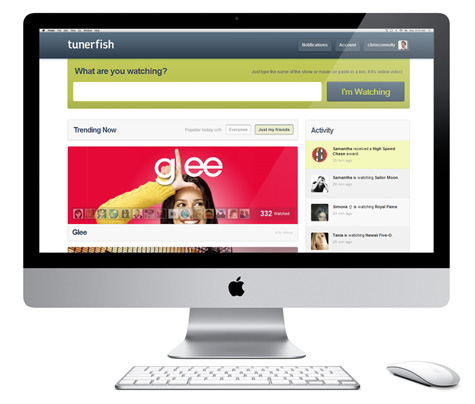