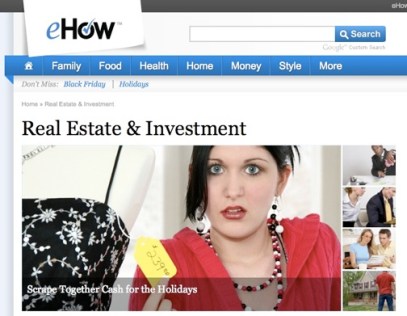 With online media company Demand Media likely to price its IPO within a matter of days, I thought it was a good time to analyze how the company is likely to be valued in the public markets. I have to admit, when I first looked at Demand Media’s S-1 financials, my first thought was, “Uh oh, another company that thinks it’s still 1998”, a time when IPOs, like Boo.com, the Globe.com and eToys, rose to astronomical valuations based not on financial fundamentals but on the seemingly infinite promise of internet-driven growth.

As I dug deeper, though, my thinking changed -– radically. I can now envision a scenario wherein Demand Media, whose properties include eHow, LiveStrong.com, and Cracked.com, is worth $1.4 – $1.7 billion. Not bad when you consider that the equity of the New York Times Company is currently valued at $1.2 billion. Before I’m accused of being stuck in 1998, let me explain how I arrived at that conclusion.

I used Internet Brands, which recently agreed to be acquired by a private equity firm for approximately $640 million, as a comparable for this analysis. It is usually better to look at multiple comparables when valuing a company, but in this case additional comparables might actually muddy the waters. Internet Brands is unique in that it is a public company (with all of the associated financial disclosures) and it also has agreed to be sold in a private transaction that both sides agreed was fair, which in my mind minimizes the effect of market hype. Internet Brands and Demand Media are also very … well … comparable. They share very similar models – both create unique content online and monetize that content largely via online advertising. Both have also pursued acquisitions for growth, acquiring online properties and rolling those properties onto their platforms to maximize profitability. In that light, it’s hard to find a better comparable.

Internet Brands had around $100 million in revenue and $20 million in EBITDA in both 2008 and 2009. It appears that company management has done a commendable job in cutting expenses in 2010 and should finish the year with around $26 million in EBITDA with some growth in revenue. Overall, though, the company appears to be in a low growth cycle (more on that later). The 2010 projected financials imply roughly a 6x revenue and 25x EBITDA multiple.

The hardest part of determining the value of Demand Media is sorting through the company’s accounting practices. Because Demand has acquired so many companies and their associated content, it reports negative gross margins, EBITDA and net income on a GAAP basis, despite showing positive operating cash flow. To help analysts come up with the “right” answer, though, the company provides a non-GAAP measure that it calls OIBDA (operating income before depreciation and amortization).

While this may seem like a 1998-inspired make believe number, when you look closely at the reconciliation between it and GAAP Operating Income, they are actually just backing non-cash items out of their operating income, which makes it a pretty close proxy to EBITDA and therefore a valuable metric. To derive a valuation for Demand Media, I applied the multiples I calculated for Internet Brands. I assumed for this purpose that OIBDA was equivalent to EBITDA. The Revenue and OIBDA/EBITDA multiples imply a valuation of $1.4 – $1.5 billion. (The operating cash flow multiple implied a lower valuation, but I discarded it as an outlier.)

Based on this analysis, you might conclude that a valuation in that range is fair, but this simplistic analysis fails to account for relative growth rates. Demand Media is growing at a pace of 25 – 50% depending on which financial metric you choose to use (revenue, operating cash flow or OIBDA). Internet Brands grew at a 10% – 30% rate using the same metrics (and most of that was due to cost-cutting). Clearly Demand Media deserves some sort of premium for its higher growth rate, assuming you believe it is sustainable. I ran a simple “what if” scenario to see what the company would be worth with a 10% and a 20% valuation premium based on its higher rate of growth. (These are likely conservative if you believe Demand Media’s growth story.) When you apply these premiums, Demand Media’s valuation increases to $1.6 – $1.7 billion.

Conclusion: It Really Comes Down To Growth

As with many IPOs, the most interesting question when deciding the “real” value of Demand Media is whether or not you believe the company’s growth story. The company has two primary lines of business: a domain registrar business and a content creation business. Demand had $114 million and $198 million of respective revenue in those two lines of business in 2009. The domain registrar business, which includes the practice of “domaining,” or owning and monetizing domains with intrinsic value, is highly competitive and, in my opinion, unlikely to grow rapidly. If that was Demand’s only line of business, then I think growth rates akin to Internet Brands would be the target. However, a bulk of the company’s growth is likely to come from the content creation business. Demand Media has developed a content creation process that allows it to rapidly and cost effectively develop articles on topics that are likely to drive traffic from search and, for its branded content sites like Cracked and LiveStrong, from social media. It even sells components of this process as a service to major publishers, such as USA Today (travel). So the real question in evaluating its growth story comes down to whether or not you believe two things about its content creation business:

1. That there’s room to run — Demand Media targets evergreen and breaking topics with targeted articles that it produces “on demand”. The question is, how much coverage does the company already have? If you believe there is a limit on the number of new stories it can create because it has covered most of the valuable topics, then you should not buy into the company’s growth story. However, I personally believe that Demand Media has only scratched the surface of available topics. The search and social space is huge, and new topics are being searched for and shared every day. As long as the company’s systems are capable of identifying these topics in real-time, it should be able to sustain growth.

2. That the economics work — This is the billion dollar question. Demand Media pays an up-front cost to create a story targeting a specific topic. So what is the average payback today, and what will it be in the future? The big difference between the company’s reported OIBDA and GAAP EBITDA is amortization of assets that the company developed or acquired in previous periods. The question in my mind is, how much of its amortization is related to content creation? Based on the fact that the company is generating good operating cash flow, it appears the content it has created or acquired in the past is providing a nice return. So let’s assume the model has worked historically. Then the question is, will this continue? If too many companies attempt to replicate Demand Media’s model, the fear is that there will be a “race to the bottom”, and the return on each article produced will be significantly diminished. Demand Media has two primary barriers to entry that can help minimize, but not eliminate, this risk. First, the company owns domains that are popular in search and social media and therefore it has an advantage in distribution. Second, the company’s content creation process is well developed and probably more efficient than a new entrant’s process would be. However, neither of these factors completely eliminates the risk, so I believe this is the primary risk to Demand Media’s growth story.

However, if you believe Demand Media has created a new media model that will help it sustain more rapid growth rates, the company is likely worth north of $1.7 billion. My belief is that reality is somewhere in the middle. Only time will really provide the answer. However, when you see a newcomer like Demand Media likely to command a valuation 15 – 50% higher than the current $1.2 billion market cap of the New York Times Company (which also has approximately $1.9 billion of long-term debt, so its total enterprise value is over $3.0 billion), it is probably worth taking a moment to ask yourself what you think of this new media model.

Stephen Walker is chief operating officer of Perfect Market, a company that helps online publishers monetize on their content. He previously worked at Idealab helping technology startups and was most recently managing director of the new ventures group at Idealab, where he sourced, screened and led new product and business concepts.