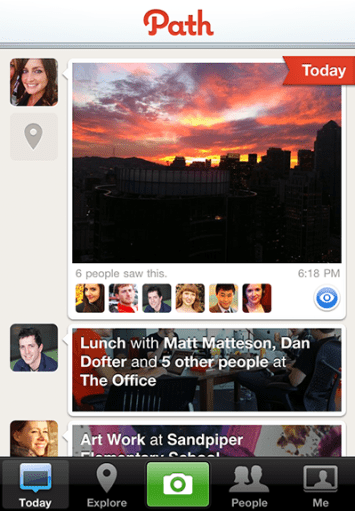 Path, a photo-sharing startup by former Facebook executive Dave Morin that launched today, is one of those companies that carries with it a tremendous amount of hype — due both to its pedigree and its secrecy.

We’ve been speculating for some time on what Path, which is also co-founded by Shawn Fanning and Dustin Mierau of Napster fame, is actually about. Now we know: It’s a photo-sharing social network (the company calls it “The Personal Network”) limited to 50 of your closest friends and family.

You can upload photos from the company’s iPhone app and share them with your close connections without worrying as much about privacy as you would sharing via Facebook or Flickr. Users can also sign up via the web and view photos online.

There’s certainly a difference between the type of content you’d share with your close friends and content you’d share with your hundreds of Facebook or Twitter followers. On the surface, Path resembles recent hit mobile photo-sharing services Instagram and Picplz. It definitely won’t replace any of your existing networks with its 50-person limit, but the company is hoping it finds success among people who want share their lives in a more private fashion.

In many ways, Path is a strange animal in this day and age of hyper-connected services. Photos you upload in Path stay in the network and can’t be sent to Twitter, Flickr, or other services. Your friends also can’t comment or “like” photos, and the only way you can add context around a photo is by adding tags for people, places, and things. You have to add friends individually to the service — either from your contacts or by inputting their email address — and every photo you upload can be shared with a smaller subset of people in your network. Path also offers a feedback feature called “See”, which lets you know when somebody is viewing your photos the moment it happens.

Path says it chose the 50-user limit based on the research of Oxford Professor of Evolutionary Psychology Robin Dunbar. His research suggests that the maximum number of social relationships we can sustain is around 150 and that the rough limit for personal networks is around 50 people. “These are the people we trust, whom we are building trust with, and whom we consider to be the most important and valued people in our lives,” the company wrote in its introductory blog post.

At the moment, I’m not quite sure what to make of Path. The pedigree involved makes it worth paying attention to, but feature-wise it doesn’t live up to the hype it’s built up (although, granted, that may be an impossible goal). It sounds great in theory, but will users see the need for a service dedicated to their “personal network”?