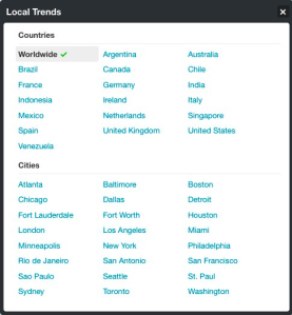 In an effort to increase global outreach, microblogging platform Twitter has added 13 countries and 6 cities to its localized trending topics list today and announced plans to roll out integrated translations within tweets.

Twitter’s trending list tracks keywords within tweets and promotes topics that appear at a high frequency at any given moment. The list has given users a useful way to keep up with the pulse of the platform, but when specialized to countries and cities it can be even more useful, as it lets users gauge local trends in and specific to their area.

Additionally, the company said it plans on integrating Google Translate within its details pane, showing an automated translation for tweets in other languages. The feature is currently in use by a small percentage of users but will be rolled out site-wide within the next few weeks.

Over the past year, Twitter has seen monumental growth internationally. Back in March, real-time analytics firm Semiocast found that only 30% of tweets originated in the United States, with English accounting for less than 44% percent — a decrease from 50% just two months prior.

With an estimated 190 million users in its back pocket, the site has come a long way from being the talk-of-the-town at the SXSW Conference in 2007. As countries around the world continue to get hit by the Twitter plague, there’s no telling how high that number will climb.