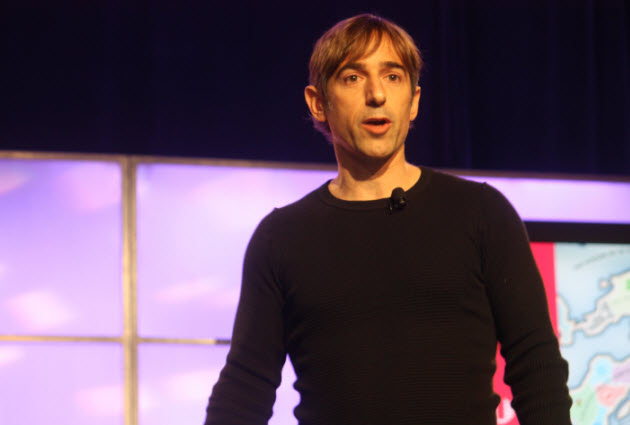 Mark Pincus, chief executive of Zynga, wants a “dog activated world.” That means he wants to see Zynga’s dog logo everywhere. If you see the Zynga logo on an iPad app, for instance, you can launch it to see all of your Zynga social games. 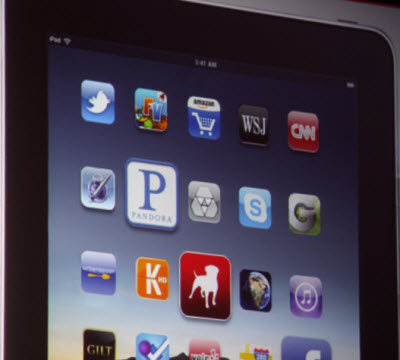 In this future world, Zynga’s games won’t be tied to just a single platform such as Facebook. They will be wherever users want them to be. As you can see in the image at right, Pincus believes you will have a bunch of apps that you can launch in order to get your favorite branded experience, whether it’s Zynga for social games, CNN for news, or Twitter for instant communication.

Zynga matters right now because it has grown to an estimated $500 million in annual revenue and more than 1,200 employees in just three years. It makes social games on Facebook that are played by many of the social network’s 500 million users, but it is also busy expanding to new platforms from the iPad to Android phones.

Pincus, speaking at the Web 2.0 Summit in San Francisco today, had a short speech and didn’t really explain what he meant on the topic of the conference, Points of  Control. But he said, “The future is not about points of control (where companies control what users see). It’s about user control. Users will have services that they feel will be basic, like a dial tone. It’s always there. It’s annoying if it’s not there.”

Of course, for a company to make it into the shortlist icons in the image, it will have to have indispensable services for lots of people. Pincus said that more than 320 million people have played Zynga games such as FarmVille. As many as three million people play Zynga games at the same time on any given day.

Zynga’s goal is to get people to play the company’s games during their break times for 10 minutes at a time, Pincus said. “It’s for when you don’t have time to watch movies or TV or console video games.”

To get to a larger number of users and keep growing, Pincus said Zynga is focusing on providing “bold beats.” Those are the key mechanics in games that keep people coming back. In FarmVille, for instance, the bold beat is crafting cottages or creating “buildings that matter.” In FrontierVille, it’s the ability to get married to another player. (Pincus noted that there are more than 650,000 same-sex marriages in FrontierVille, something that the game’s designers didn’t anticipate at all.