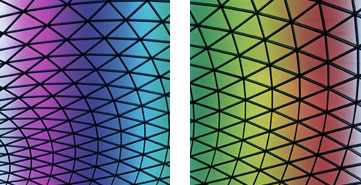 NLAB Solar just landed an investment of $2.6 million from Fasadglas Bäcklin, Scandinavia’s largest glass facade company. NLAB Solar manufactures energy-producing dye-sensitized solar cells (DSC). The cells which can be integrated into transparent and colored facades such as those produced by Fasadglas. The funding will be used to accelerate product development in NLAB’s new plant in Stockholm.

DSC operate in a similar manner to photosynthesis in plants. In nature a dye called chlorophyll, which gives plants their green colour, absorbs solar energy. That energy is used to convert carbon dioxide into sugars which feed the plant. DSC cells use an artificial dye to absorb the energy in sunlight. Most solar cells available today are based on silicon. When sunlight hits the silicon, electrons flow through the material to produce electricity.

Although DSC has a lower efficiency rate than silicon cells, it can be made transparent and produced in different colors, which explains Fasadglas’s interest in the technology. The DSC film can be built into windows and building facades where sun shading film is normally used. Based on an energy efficiency of 5.1 percent, one meter of glass facade in Stockholm (1000 hours of sun per year), could provide electricity for approximately one square meter of office space. NLAB aims for 4 percent efficiency in transparent cells for window applications in urban environments.

DSC cells also have other advantages such as higher efficiency under low and angled light conditions. DSC cells are much cheaper to manufacture than silicon since they do not require pure silicon as a raw material or the related complex manufacturing equipment.

NLAB Solar’s twist on DSC technology is to add a one-dimensional photonic crystal (1DPC). This is a transparent mirror placed inside the DSC that reflects certain wavelengths of light back through the dye layer. This increases the number of photons striking the dye and leads to higher efficiency. The company claims to have seen a 37 percent improvement over standard DSC, which would improve the efficiency from 4 percent to approximately 5.5 percent.

NLAB Solar previously received a $2.5 million grant from the European Commission to build Sweden’s first pilot plant for the production of DSC solar cells. The plant will be built in Stockholm in 2010-11 and cost $5.75 million in total. NLAB Solar’s plant will be the first in the world to manufacture DSC with iDPC on an industrial scale.