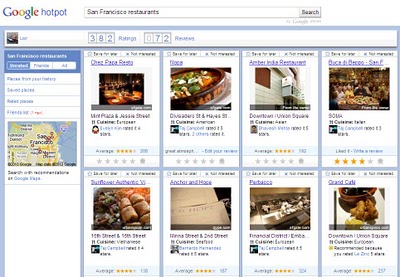 Google today announced on its blog the release of Hotpot, a recommendation engine for local businesses based on you and your friends’ ratings. Hotpot is an addition to the company’s Google’s Places initiative, a campaign to get local business owners to claim their venues, verify information and engage with customers.

Hotpot is a pretty simple concept, but when connected with a business directory of more than 50 million places, it can be a powerful consumer tool. Users sign-in and are prompted to search for a general theme and establish their location. The default search is “restaurants”, and Google did a decent job of finding me without me having to put in my exact location. For accurate results, take the time to enter your town; otherwise, you may end up with results that are 50 miles away.

The real recommendation part of the feature comes from users proactively rating businesses they’ve patronized. Ratings are on a 5 star system — 5 stars being excellent and 1 star being terrible. As a user rates places, Google’s Hotpot determines other places the person may be interested in visiting. For example, if I rate an Italian restaurant very high, the tool may suggest other Italian restaurants.

If you decide to share your ratings with friends, you can then see places they recommend. The idea is that if someone is your “friend”, then they may like similar food, clothes, etc. Google gives the example of visiting a foreign town and being able to look up ratings left by a friend who’s a local.

Hotpot is a pretty simple recommendation engine, but when coupled with Google and its consumer reach it could be a fairly popular resource. The tool appears to combine the best of two worlds: Yelp and its reviews and Foursquare’s sharing of someone’s location.

Several other companies already have similar offerings on the market, including SoGeo, a service that collects and analyzes location data for users, which recently unveiled Whatser, a free mobile application that suggests where to go based on places that you like and that your friends like. Foursquare may also be testing a new recommendation feature for its popular mobile check-in application based on the large amount of data it has on the businesses its users frequent.

Google has also created a Hotpot rating application so that users can quickly and easily rate and find friends while on their phones. The company also upgraded Google Maps on Android to allow users to input and view ratings on the go.