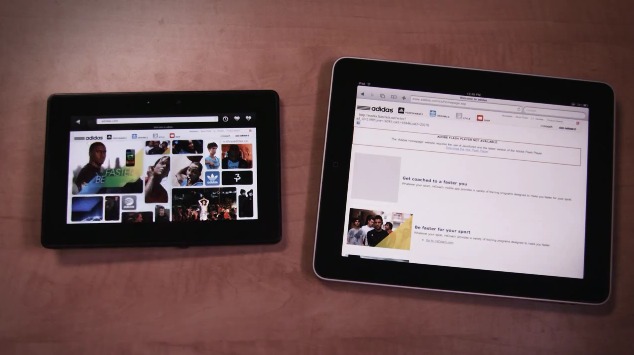 When it comes to simple web page rendering, the PlayBook manages to load sites like UEFA.com and CBS.com before the iPad even renders a single element of the page. The video also demonstrates the PlayBook’s Flash compatibility, which appears to be surprisingly fast given how much Flash slows down normal computers. The iPad, of course, can’t render a Flash page at all.

Both devices score 100 out of 100 on the Acid 3 browser test, a popular way to determine how well a browser adheres to web standards, but the iPad demonstrates a small rendering error that puts it slightly behind the PlayBook.

Finally, the PlayBook also beats out the iPad when it comes to rendering Javascript and HTML5 Canvas elements, which are increasingly used for rich web content. Using the Pocket Full of Canvas test, the PlayBook’s browser managed to play the HTML5 demonstration smoothly, while the iPad seemed to be chugging along at a slow frame rate.

The browser tests seem fair, but since the video was produced by RIM and not an independent third-party, we can only trust its findings so much. I don’t have an iPad to confirm its page loading or HTML5 performance, so let us know if you see the same sluggishness on your iPad.