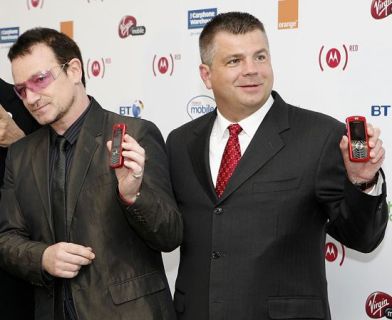 Changes are afoot with Dell’s mobile communications group. The company announced yesterday that the division’s chief, Ron Garriques (pictured right with singer Bono), is leaving Dell as the company integrates the group into its “core operations”, Reuters reports.

Garriques joined Dell in 2007 and was tasked with managing its mobile consumer business. The company adopted Google’s Android mobile operating system and started selling its Mini 3i smartphone in China last year. In August, Dell rolled out its long-delayed Aero smartphone in the US. It also launched a 5-inch tablet, the Dell Streak, this past summer, which struck a baffling balance between being a very large phone and a small tablet.

None of those devices found much success in the marketplace, but the company did show some promise when it announced its high-end Thunder and Lightning phones, which ran Android and Windows Phone 7 respectively. The Lightning was eventually renamed the Venue Pro for Windows Phone 7’s launch.

Garriques arrived at Dell after serving as the head of Motorola’s mobile phone division. He’ll be leaving the company by the end of January but will continue to provide consulting services throughout 2011 (for which Dell will pay him a whopping two payments of $3.15 million).

The news doesn’t mean the end of Dell’s mobile plans. The company has yet to release its Thunder Android phone, and it’s planning larger tablets as well.