People that know me know that I'm a huge fan of the old space sims from Elite all the way until Freelancer. But after Freelancer there hasn't really been any great accessible space sim that I can recall. That is until this game. If someone told me a few years ago that the revival of space sims will be on my phone, I'd have slapped him. But now it's true, I really can't wait for what else these dev's got coming. 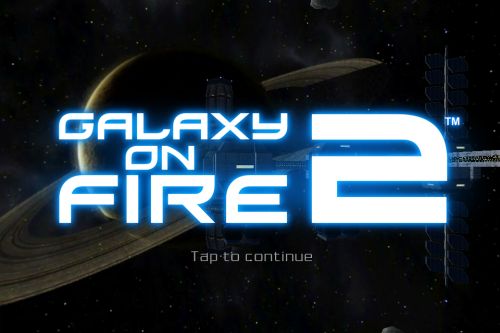 For people that been gaming on java phones pre iphone days, they may have heard of the company Fishlabs. They make really amazing looking java games with full 3d graphics. Now they are porting a lot of them to iphone with completely redone graphics and controls. The graphics are as equally as amazing on iphone comparatively as they were on java phones. They look especially well on a retina display device. Detailed spaceships, vast planets in the backgrounds, really good special effects, and at a really smooth framerate. I heard it also works well on other 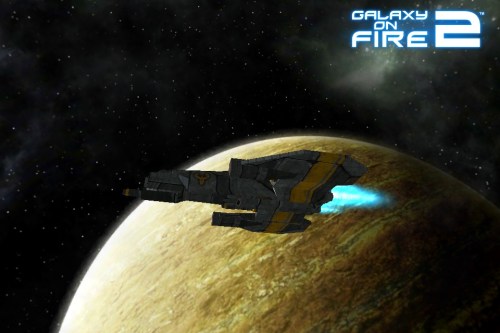 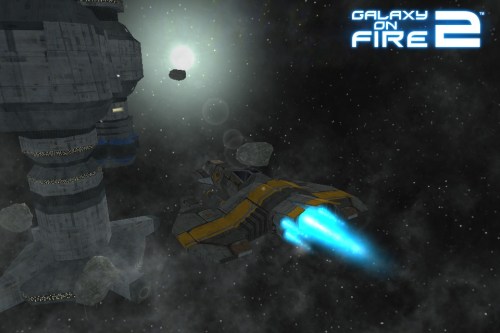 note: These pics were taken using the ingame screen capture. 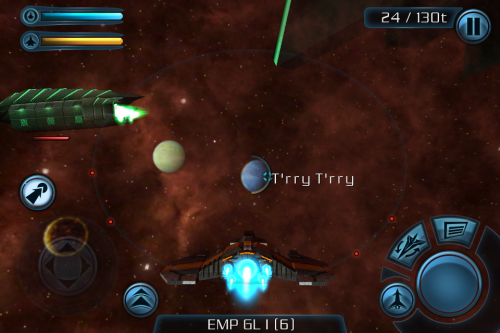 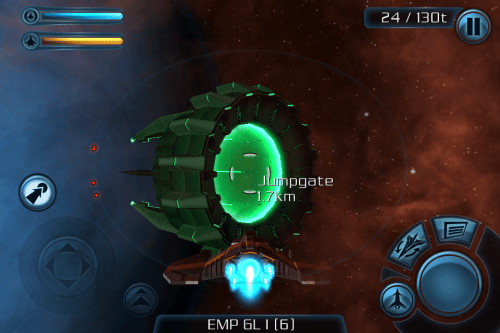 Now that you're done oozing over these pretty amazing pics, now let's get into the actual game. If you played any space sims, you have a good picture what ya getting into. There is a pretty light story mode, which is fully voice acted which is pretty rare for an iphone game. The game also advertises over 100 different types of space stations each with a different gorgeously painted planet in the background (which is kinda sad, because I'd love planetary landing, but remember this is essentially just a java game). The main story missions are varied and to the point, but it's pretty short. Luckily that isn't the major part of this game. There are tons of side missions and over 30 different spacecrafts with different stats. There are also tons of customizable elements with tons of armors, scanners, shields, etc. Not to mention a mining system and a trading system. This game does not cut corners. Now to get to my issues.

For better or worse, the whole universe is random. There is seemingly no correlation about where you can purchase what items, which makes searching for a specific item really frustrating. This doesn't bode well for a portable game. Another issue is that space combat just isn't that deep. With no throttle control and only a limited boost, it makes combat fairly stale and more dependent on your gear vs skill.

But those are fairly small issues in a whole. A really awesome part is that Fishlabs are open to all opinions and are really active on their forums. They recently released their first update for this game and addressed many issues that people had additionally to the usual bug fixes. Just check this out:

Universal support for iPad will be added in the next update!

–New features:–
Added spanish, polish and russian language, more to come with the next update
There now is a button that allows you to fast-forward time if the autopilot is active and there are no enemies in sight
You can now change the language from within the game
You can now listen to your iPod music while playing
You can now skip the Space Lounge camera movement
You can now find Void Crystals on Thynome if you "accidently" sold your Khador Drive after finishing the main story
The level cap was raised to 20

You don't even need to know this game to see that the devs are dedicated to this game.

So yes. I highly recommend this game for people that a little more than a simple puzzle game on their iphone. It's currently priced at $7 but you can easily get at minimum 10 hours out of this game if you only do the basic story line. It will rise to $10 when the universal update for ipad support comes out later. So pick this up even you own an ipad because it's well worth your money.