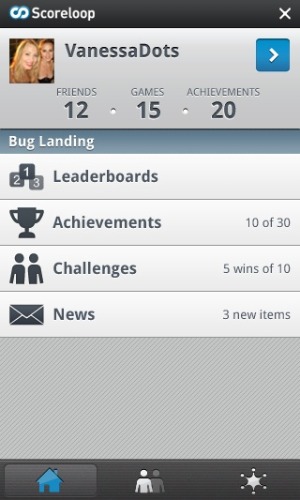 The company said that out of the top 10 most active games currently within Scoreloop’s community, four of them are now cross-platform, led by iOS and Android. In that category are two iOS games Toobz from Off Center software, which has seen over 10 million downloads, and Frenzic from Iconfactory.

The platform is noticing the interest and also announced today that it has updated its Android SDK 2.0 features to include news and cross promotions, which lets developers communicate directly with their users to cross promote games, give updates and provide hints.

The new package will also capitalize on the current white-hot popularity of social networks by letting friends connect, pull friends and photos, and post to Facebook, Twitter and MySpace via the platforms tools.

Scoreloop said it had also bolstered its Social Market, which connects millions of Android gamers worldwide, and its player challenges and virtual currency.

But Android isn’t the only smartphone gleaning benefits: The company announced last month that it is adapting its social gaming platform to support Samsung’s mobile phones and web-connected TVs.