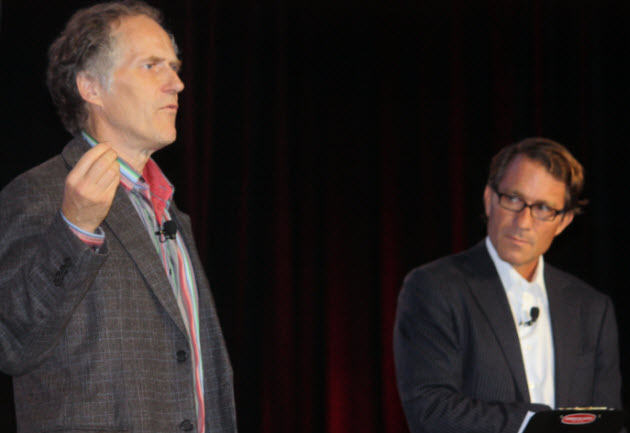 The Web 2.0 Summit drew the who’s who of the digerati to San Francisco this week. Chief among them were conference organizers Tim O’Reilly (left) and John Battelle (right). O’Reilly opened the conference talking about the theme of “points of control,” or key pieces of technology that companies can use to dominate their markets. O’Reilly started out with a plea that companies not engage in destructive competition. Rather, he suggested they find the Blue Ocean of untapped markets and new users. The photo gallery below shows many of the speakers and a brief summary of what they talked about. Enjoy. And for a fun comparison, check out last year’s photo gallery. 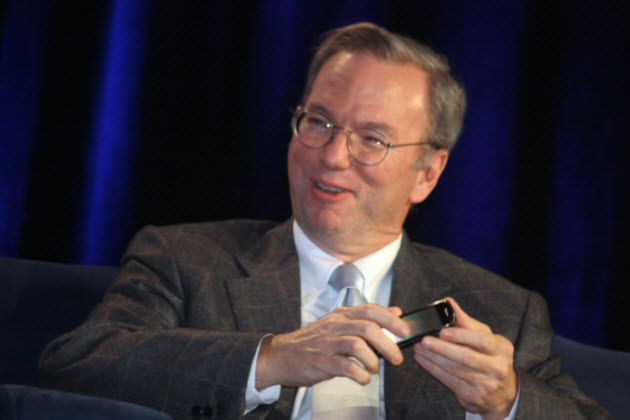 Eric Schmidt, chief executive of Google, opened the conference and showed off a new Android phone, widely believed to be the Google Nexus S, which will have near-field communication built into it. If you wave such a phone over a reader, you can use the phone to make a payment. Such phones are common in Japan, but the infrastructure has to be built still in the U.S., at both merchants and in cell phones. Schmidt said the Gingerbread version of Android will support near-field communication and debut in a few weeks. 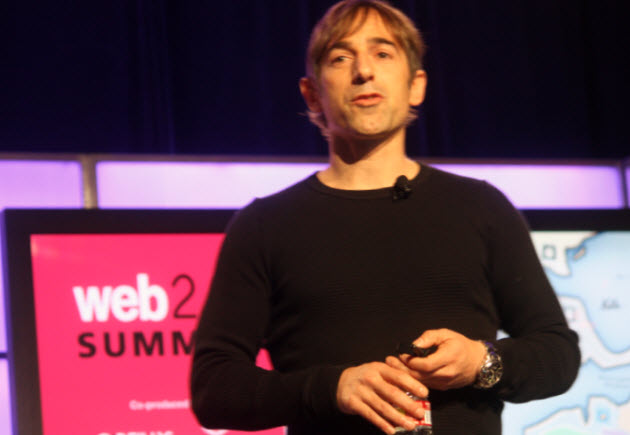 Mark Pincus, chief executive of Zynga, has seen his social game company skyrocket in three years to an estimated $5 billion market cap, $500 million in 2010 revenues, and 1,300 employees. In the future, he believes that we’ll be able to get brands on tap. For instance, Zynga’s dog logo will be an icon that you can tap on with any device. That icon will take you directly to your favorite Zynga apps. 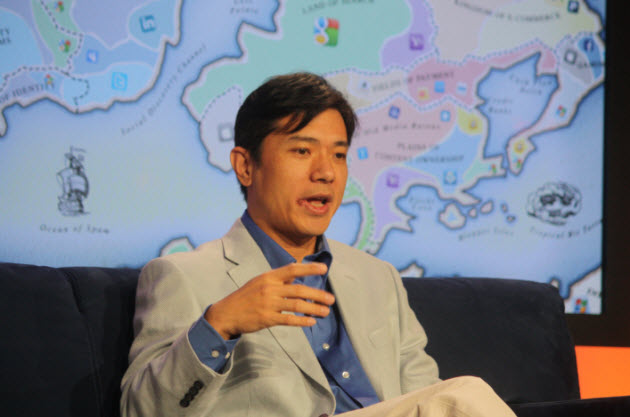 Robin Li, chairman and CEO of Baidu, suggested that Google wasn’t patient enough to succeed in the Chinese market, where heavy regulation makes it difficult for outside companies to succeed. Li said his company has 99 percent of China’s 400-million-plus internet users as its customers. 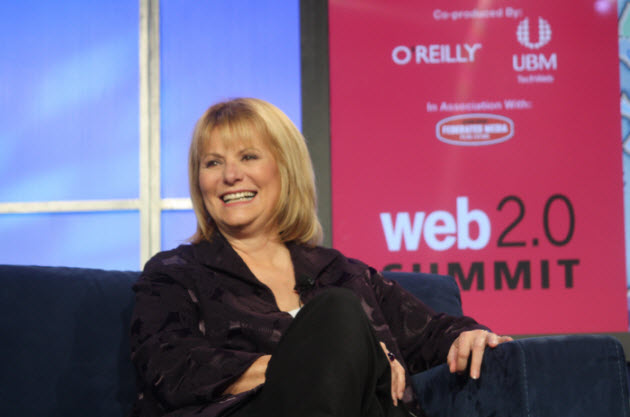 Carol Bartz, CEO of Yahoo, had to walk interviewer Battelle through yet another explanation of what Yahoo is, this time without expletives. 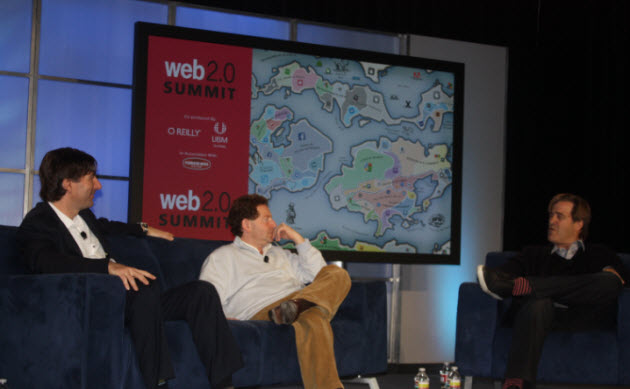 Bing Gordon (right), partner at Kleiner Perkins Caufield & Byers, interviewed two of the leaders of the video game industry, both of whom are sitting pretty. Bobby Kotick, (center) CEO of Activision Blizzard, is a big winner this season because the company’s Call of Duty Black Ops game sold more than $650 million in its first five days — breaking all records. Don Mattrick, (left) head of Microsoft’s game business, is also happy because the company sold more than 1 million Kinect motion-sensing systems in its first 10 days. 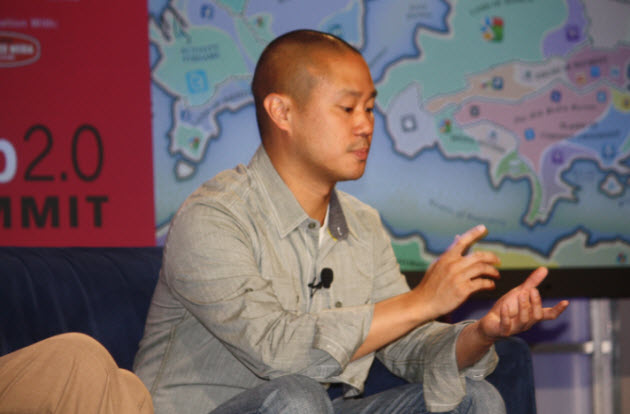 Tony Shieh, CEO of Amazon’s Zappos, says that the marriage of Zappos and Amazon, now a year old, has gone very well. His company now has more resources for expansion. It has 2,500 employees now and is adding 2,000 more. Shieh wrote a book on happiness and gave away copies of it at his Delivering Happiness bus, which is touring the country. 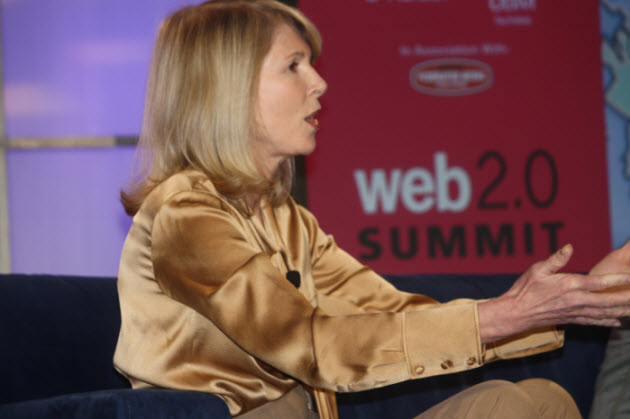 Susan Lyne, chairman of shopping site Gilt Groupe, says that everyone comes to shop at her company’s site during their lunch hour, putting lots of pressure on the company to get its web service right. (She bought her blouse from an Italian designer on Gilt). 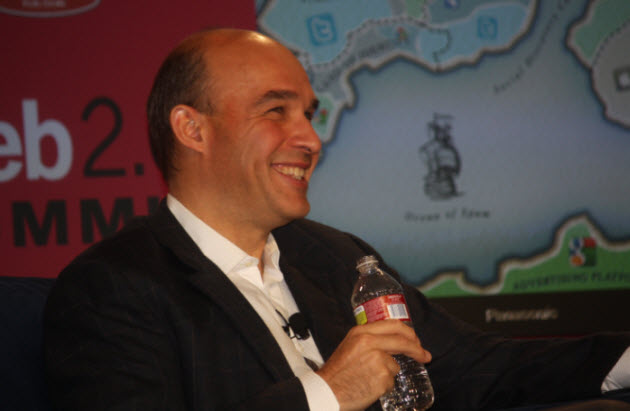 Research in Motion co-CEO Jim Balsillie gleefully disagreed with Apple’s view that apps will triumph over the web in mobile phones. “We completely disagree with that world view,” he said. 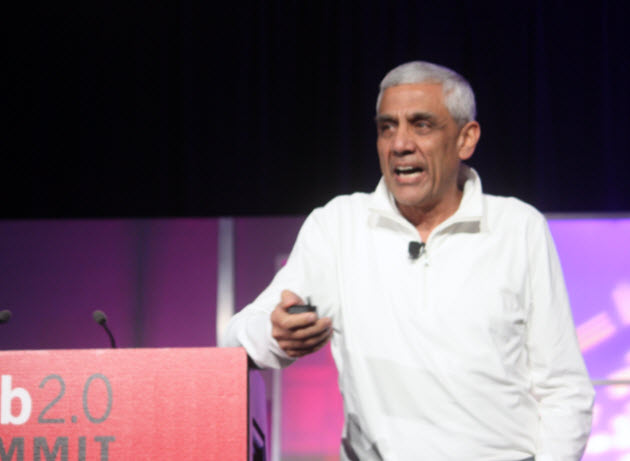 Vinod Khosla, founder of the Khosla Ventures venture capital firm slammed pundits, the press and prognosticators for being so bad at making predictions. He quoted Karl Marx, who said, “When the train of history hits a curve, the intellectuals fall off. In 1986, he said, McKinsey predicted there would be 1 million cell phones in 2000. It was off 10,000 percent, since there were 110 million phones by that time. But based on McKinsey’s forecast, AT&T got rid of its own cell phone business. 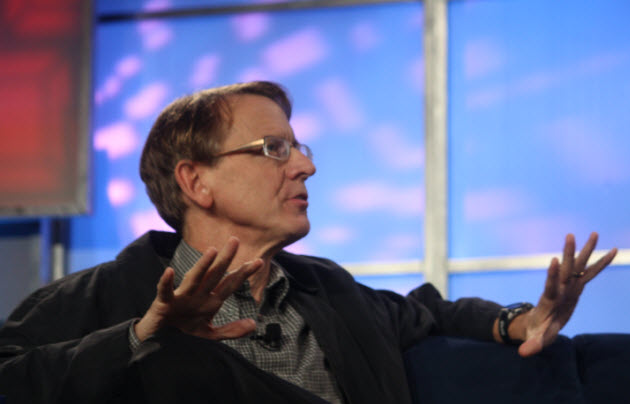 John Doerr, partner at Kleiner Perkins Caulfield & Byers, is the “Michael Jordan of venture capital,” according to his fellow panelist Fred Wilson of Union Square Ventures. Doerr said that he believes yet another social boom is underway and that is why Kleiner Perkins co-created a new $250 million sFund for new investments in social. He said the model for the investments is Zynga, which is in Kleiner Perkins’ portfolio. Zynga’s value is $5 billion, and it is the most profitable company, fastest growing, and has the happiest users of any Kleiner Perkins company, Doerr said. He also said his firm was wrong to turn down Twitter. 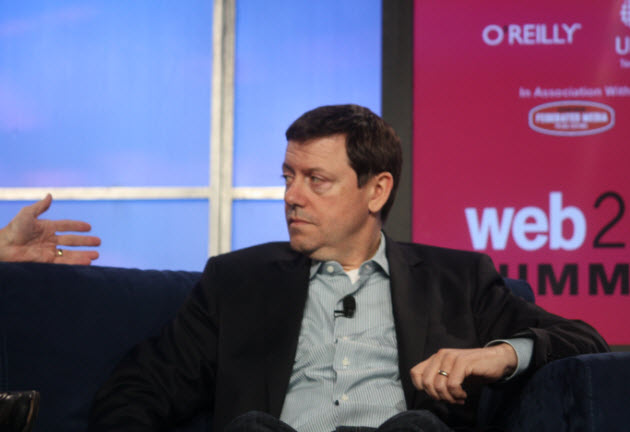 Fred Wilson of Union Square Ventures worries that big companies are just copycats and are squelching innovation by startups. He is also concerned that we’ll soon see the air let out of the latest tech investment bubble. Wilson was lucky enough (so far) to be one of Twitter’s investors. 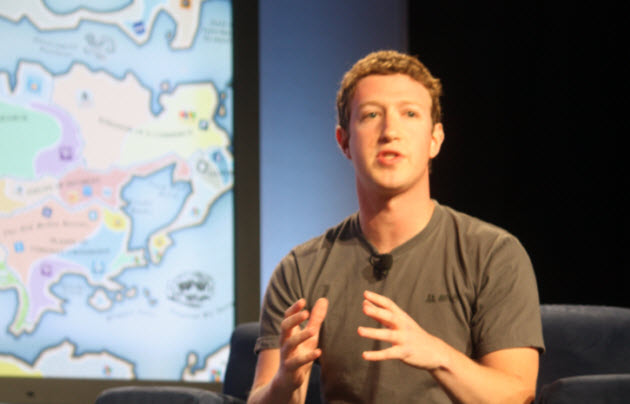 The cherubic face of Mark Zuckerberg was in the spotlight. But Zuckerberg didn’t buckle. He defended the company’s aggressive moves to add new features to Facebook and credited social games for helping Facebook take off. He said Facebook isn’t likely to invest in content, as companies such as Zynga do it better. 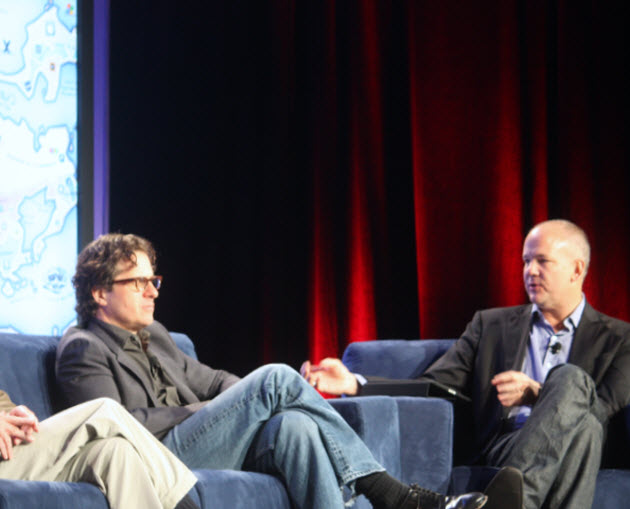 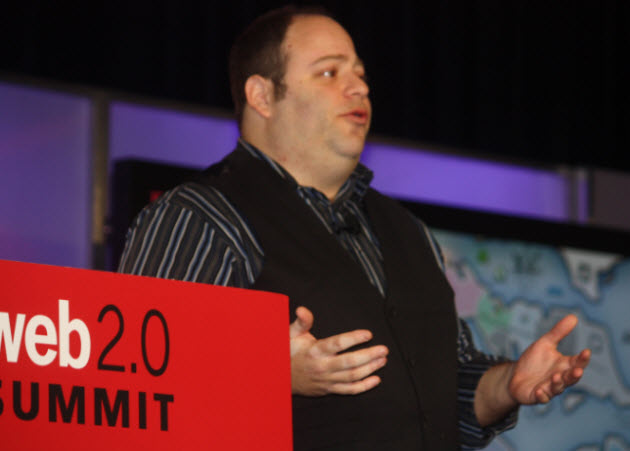 Adam Sadowsky gave a talk on lessons for innovators that came from the construction of a huge Rube Goldberg machine. Sadowsky’s company Synn Labs made the machine a music video for the song This Too Shall Pass by OK Go. Among his advice: details matter. 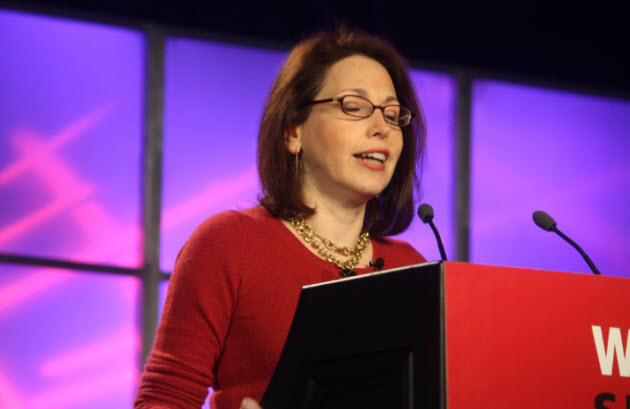 Katherine Savitt, CEO of youth-oriented social network Lockerz, said that Generation Z, the children of the Baby Boomers, is becoming a huge and distinct generation of tech users. These kids are curators of their own content. They sift through the tons of stuff on the internet, latch on to what they like, and then promote the heck out of it. 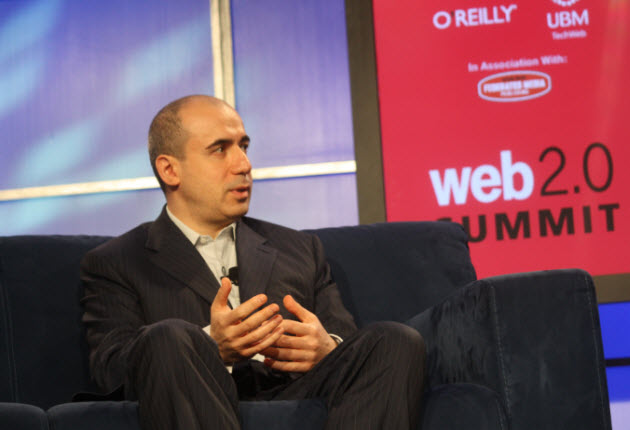 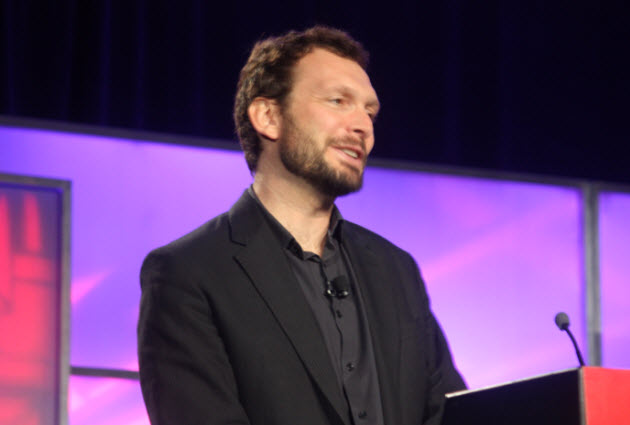 Toni Schneider, CEO of Automattic, the creator of the WordPress blogging tool, spoke about how users will take control of technology and use it for their own interests. The five-year-old company has a mission of democratizing online publishing. There are over 30 million WordPress sites now. They attract an audience of 250 million people for WordPress.com sites alone. 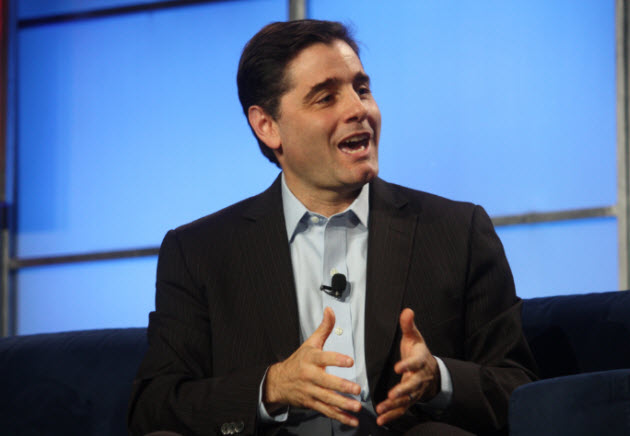 Julius Genachowski, chairman of the Federal Communications Commission, said that he believes the U.S. can be the leader in mobile broadband by setting aside more spectrum for new mobile services. He said that 65 percent of the country has access to broadband now, and that is low compared to countries such as Japan. He was not so happy that Google and Verizon teamed up on a net neutrality proposal that he didn’t really agree with. 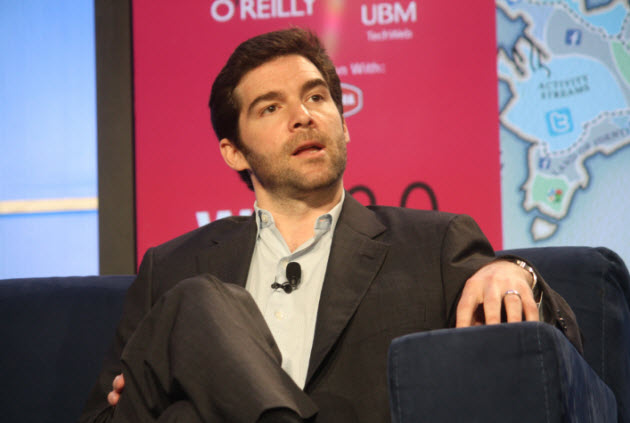 Jeff Weiner, CEO of LinkedIn, is confident that his business-focused social network can withstand any invasion from Facebook. He cited the “keg stands” problem that Facebook has, where users frequently post inappropriate pictures that potential employees might see. (A keg stand is when you hold someone by their feet and get them to drink out of the hose for a keg). 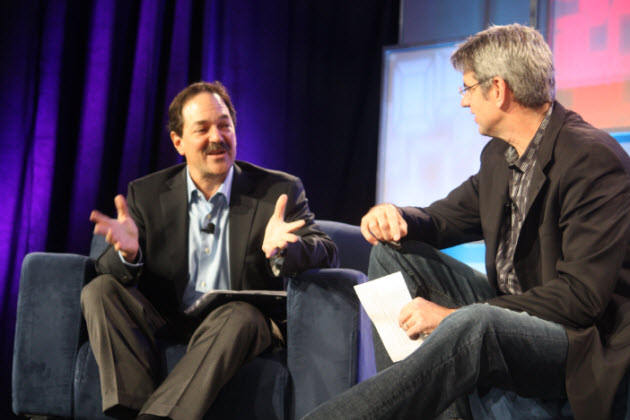 Frank Quattrone (left), the former financier of Silicon Valley who is now back in business as a merger advisor, talked with Bill Gurley (right), partner at Benchmark Capital, about finance trends. Quattrone said he expects to see more mergers and acquisitions among tech companies because every big company is going vertical. Apple, for instance, makes services, operating systems, software and hardware. Other companies want to own their own supply chain as well so they can control their own destinies more easily. That means that when a company is for sale, there can now be many more potential buyers since the companies don’t mind crossing industry categories anymore. 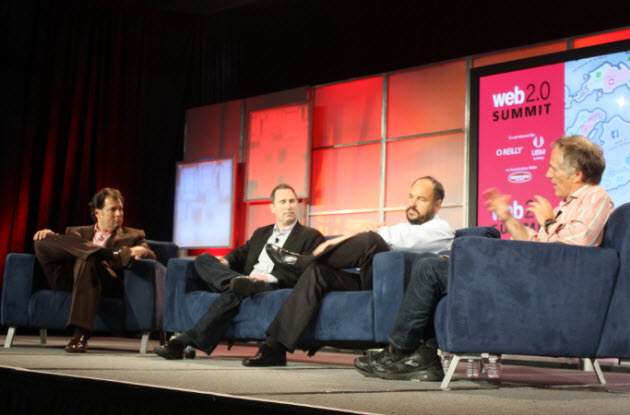 The titans of cloud computing talked with Tim O’Reilly, (right) about the impact that virtualization would have on technology. The panel included Paul Maritz, CEO of VMWare (second from right) and Andy Jassy, senior vice president at Amazon (second from left). They made fun of Oracle chairman Larry Ellison for thinking of the cloud as a product, not a service. Mark Benioff (far left) used the stage to tout his upcoming cloud conference. “Ever the salesman,” O’Reilly said. 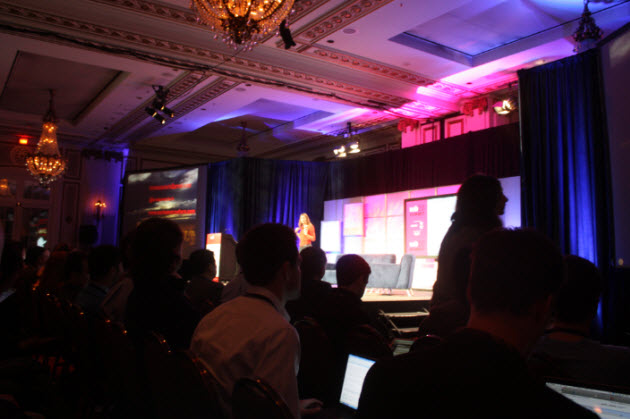 Krissy Clark (the small orange spot in this picture) is an award-winning journalist and documentary maker who believes that location-aware technologies may be key for getting stories about places told. She wants to create an augmented reality solution where people can go to a place, view it through their cell phone cameras, and then listen to a story about what makes that place unique. 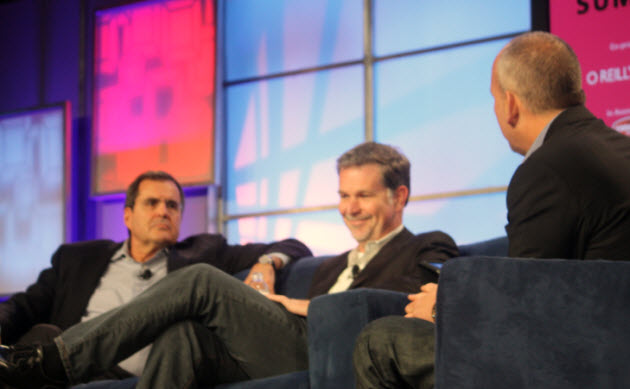 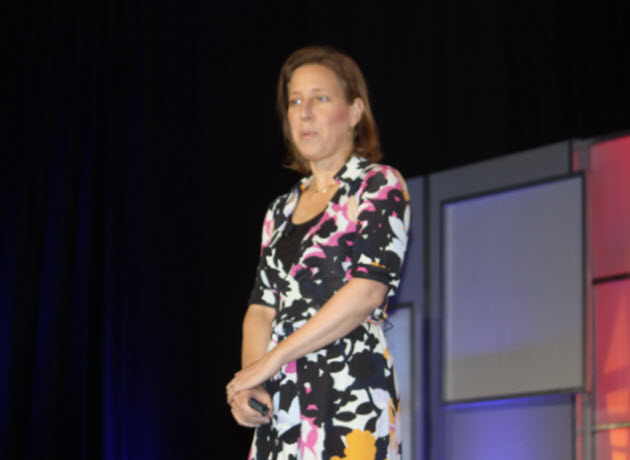 Susan Wojcicki is the vice president in charge of innovations in Google’s advertising and measurement products. She went through five whirlwind demos that show the new ways Google is making advertising more relevant and effective. At some point, Google wants to get to “the perfect ad.” 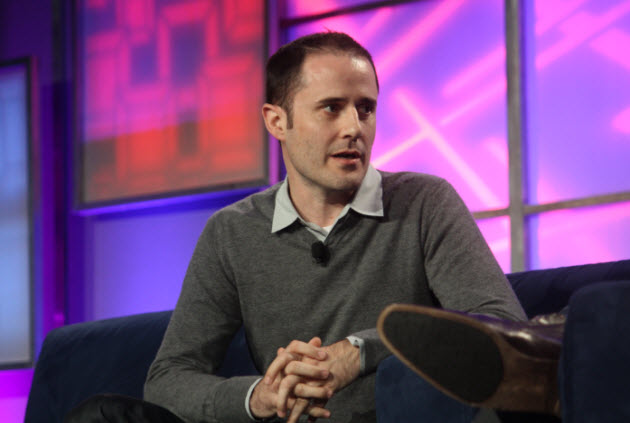 Ev Williams, co-founder of Twitter, was happy to talk about Twitter’s successful advertising business model and the many revenue options before the company, now that it has a critical mass of more than 100 million users for its micro-blogging service. He admitted that the CEO position is “kind of a sucky job.” He said Twitter is still exploring new business models.