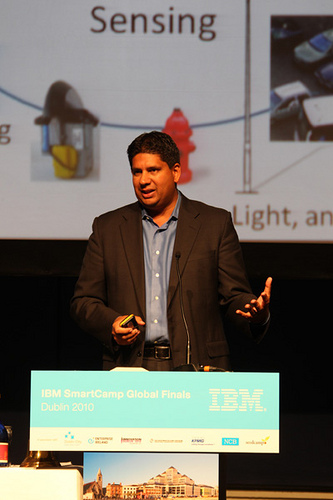 IBM’s smartcamp global entrepreneur competition culminated in Dublin today with 9 startups from all around the world competing for the title of the “world’s smartest startup”. From 660 original applicants the final winner was Streetline, which helps cities track parking violations and drivers to find parking spots.

Ultra-low power sensors are installed in parking spots, which can detect if the space is occupied. Sensors can also be installed in the parking meter to verify whether the meter had been fed and therefore detect violations.

According to Streetline, 30 percent of traffic in major cities consists of people driving around looking for parking, making it a major congestion and environmental problem. Parking fines are also a significant source of revenue for cities and currently many violations do not result in fines. Streetline systems are already deployed in cities like San Francisco and Los Angeles. New York and Washington are about to be added. Streetline charges the city per space, per month in a service model. The company also just did its first deal with a private parking garage.

In addition to detecting parking violations, Streetline will release a smartphone application in early December to direct users to the closest parking pots. Once that is in place, a city could even start doing dynamic pricing of parking spots  in order to direct drivers to particular parking areas. CEO Zia Yusuf told me that there are three major ways to get their product to consumers rather than just cities: the smartphone application, digital signs which direct people to parking (“3 spots if you turn left”) and finally partnerships with car navigation systems.

Ideally, Yusuf would like to see cities introduce integrated parking systems which include monitoring like that supplied by Streetline, mobile payment for parking, alerts when parking time is running out and mobile ticketing. He suggests that a city could even send a ticket to your mobile phone with an offer that if you pay instantly, you get a discount on the fine. Streetline also has ambitions to extend its services into traffic monitoring and beyond.

A couple of other startups received special mentions from the judges. Treemetrics is a local Irish company which uses 3D laser scanning to measure the height, straightness, taper and volume of trees in a forest. This allows foresters to reduce measurement costs and schedule logging to maximise yield.

Sproxil tackles the huge problem of drug counterfeiting in developing countries using a simple scratch-off code attached to the packaging which works in a similar way to pre-paid mobile billing. The user exposes the code and sends it by text message to a verification number which checks its validity.

For IBM, the smartcamp competition isn’t just a marketing exercise. 35 percent of IBM’s $100+ billion in revenue is driven by partners including startups. Irish social security software company Cúram Software, for example, has alone driven 1 billion EU in sales for IBM over the course of their partnership.

The common theme among startups in the finals was IBM’s smarter world mantra of instrumentation, interconnection and intelligence; basically lots of sensors and analysis of the data they produce. Most of the competing startups had deep domain knowledge in areas like healthcare, forestry, water treatment and seismic measurement as well as technical expertise. This fits well into IBM’s focus on vertical markets.

The startups get access to IBM’s market intelligence, customers and local know-how as well as the credibility a young company sometimes needs to deal with large enterprise customers. IBM gets an early look at interesting companies which could become partners or eventually acquisitions without actually investing its own cash. IBM has done 18 acquisitions in the last year alone. The company has set aside $20 billion for acquisitions up to 2015.

Front photo by John Vachon, via Touching Harms the Art