GE this week announced 12 winners in the first $55 million phase of its venture-funded $200 million Ecoimagination contest. The worldwide competition aims to hunt down the most promising cleantech startups, an area GE is actively investing in and chief executive Jeffrey Immelt has underscored in recent moves and speeches.

The company teamed with Kleiner Perkins, Foundation Capital, Emerald Technology Ventures and RockPort Capital to parse over 4,000 submissions from more than 150 countries. Their picks reflect a few rising trends in cleantech:

Most people are familiar with those panels that convert sunlight to electricity. But thermal power from the sun can also be harnessed to produce hot water for homes or to produce steam for electric turbines, like Solar Millenium’s planned 500-megawatt facility in Nevada. A few startups have been getting noticed recently for their hybrid systems that produce electricity and hot water, such as PVT Solar, which makes the PVT Echo solar system that can produce hot water, electricity and heating and cooling for the home.

Another one is Khosla Ventures-backed Cogenra Solar (pictured), which won a $1.5 million grant from the California Solar Initiative and recently marked an installation at Sonoma Winery that was attended by former British prime minster Tony Blair. Ecomagination winner ClimateWell also uses solar hot water to power heating and cooling systems for homes and commercial buildings like hospitals and is currently working with GE to deploy the technology. 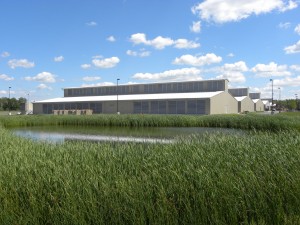 As we surmised from our GreenBeat 2010 conference earlier this month, data is the new wave in cleantech. This shows in GE’s winners, many of which use a combination of sensors, data crunching and analytics to yield energy savings — particularly in the realm of energy-sucking data centers, which GE’s managing director of energy financial services Kevin Skillern told me accounts for three to four percent of energy consumption in the U.S.

Winner JouleX monitors, analyzes and automatically adjusts energy usage of devices in a network to the tune of 30 to 60 percent in energy savings, and GE is using its technology in, yep — data centers. Another winner and GE investment SynapSense uses sensors to manage and reduce energy use in data centers. And Redwood Systems, the winner of the GreenBeat 2010 innovation competition, uses sensors and networked lighting to cut energy costs in data centers.

Greening data centers, is, of course, a big deal for the Internet behemoths — Yahoo (pictured) and Facebook have both recently made moves to green their data centers.

Smart buildings will have smart windows. The more sunlight and heat that makes it into a building, the harder a company’s air conditioning will have to work to counteract that. GE winner Soladigm makes electrochromic glass, which automatically adjusts tint on windows — a concept reminiscent of those Transitions eyeglasses. The company says its technology can reduce energy consumption for heating, ventilation and air condition systems by 25 percent.

Top construction material and glass company Saint-Gobain is also betting on the appeal of smart glass. Earlier this month, the company invested $80 million in smart glass-maker Sage Electrochromics, which has won a $72 million conditional loan guarantee from the government and is planning to build a plant in  Minnesota.