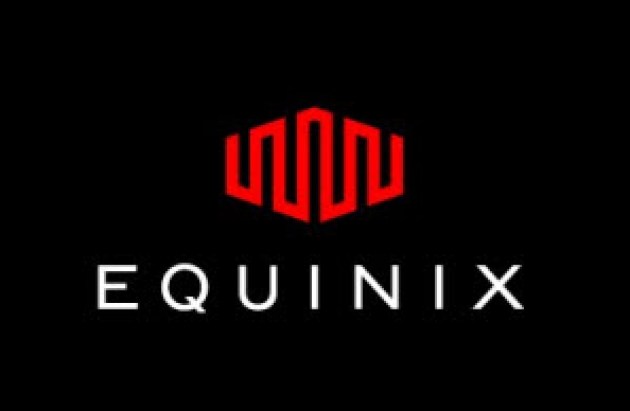 If you pulled the plug on Silicon Valley’s data centers, innovation would grind to a halt. Web services companies, from social game makers to cloud computing startups, depend on computing power leased from independent data centers to host their applications on the internet. So it’s good to know that 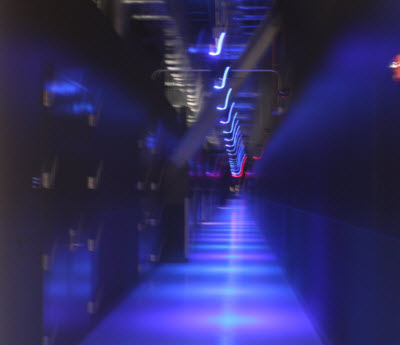 Equinix, one of the biggest data center hosting companies, just spent $103 million on the first phase of a brand new data center inside a vast warehouse building in San Jose, Calif. The data center will eventually be the host for the computer servers of hundreds of startups.

Its very existence is an expression of faith in Silicon Valley ingenuity, said Steve Smith (pictured above), chief executive of Foster City, Calif.-based Equinix, which now has eight data centers in strategic locations in Silicon Valley.

“We had to spend $103 million just to get the doors open,” Smith said in an interview at the new data center on Friday. “But because of online games and cloud computing, we know the demand for this kind of facility will be big.”

Silicon Valley startups need this kind of facility nearby so their engineers can drive to the location to install new servers or maintain existing machines. The location will serve a wide array of companies: telecommunications firms, web sites, mobility applications, video companies, enterprise cloud companies, financial services companies and virtualization businesses. Some require such quick response they have to be located within two kilometers of the building.

“This is a place where milliseconds matter,” Smith said.

The new data center is a co-location facility, where customers bring their own servers, lock them in cages, and tap into Equinix’s infrastructure. Security is extremely tight. You have to punch in a code and put your hand on a fingerprint recognition device three times just to get inside. Metal cages isolate one customer from another. And security cameras 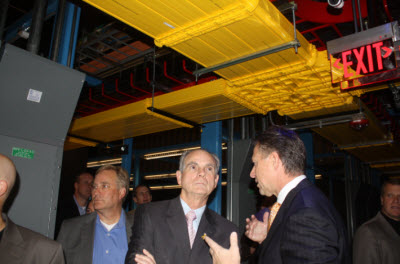 are everywhere. The building is near the West Coast hub of the internet backbone and is connected to one of Equinix’s older data centers, which houses the major fiber optic data highways connecting the biggest carriers and internet service providers. Equinix gave an inside look of the data center at its grand opening today after two years of planning.

The newest data center features state-of-the art fiber optic cables, power generators, and refrigeration (set to below 55 degrees today) so that it can handle racks upon racks of servers, the computers that power web sites and serve web pages to increasing numbers of internet users. The vast warehouse inside a nondescript building with no signs is low-key because customers don’t want just anybody to know where they store their critical infrastructure.

While most data centers have power drops and wiring under the floor, the new facility has overhead wiring, with big yellow pipes (pictured above, just above the head of San Jose Mayor Chuck Reed, center) carrying fiber optic networking directly into each section of the data center.

The customers will include companies such as OnLive, a cloud-gaming startup that has to have split-second internet response times in order to deliver high-quality 3D graphics imagery to game players over broadband connections. OnLive needs servers in multiple locations to guarantee national coverage and fast response times. 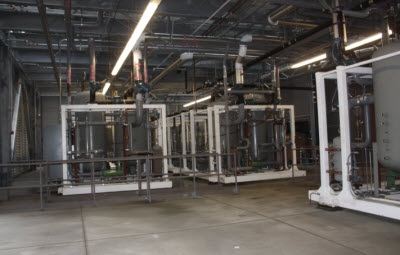 Full told, Equinix has 91 data centers across 35 markets worldwide. The company has built or acquired those data centers since 1998, when the company was founded by Jay Adelson (former Digg CEO) and Al Avery. Now with 2,000 employees, Equinix spends around $500 million a year building eight to 10 new data centers around the world. The new San Jose data center is one of the biggest, with more than 165,000 square feet that can house 2,600 cabinets of servers, when all phases are complete. All told, Equinix will spend $148 million on it. Big customers include Autodesk, Citrix Online, LinkedIn, and Pandora.

Equinix aims at the startups doing the innovating. Those small companies grow up with Equinix. But when they get really big, they start building their own data centers. Apple, for instance, is building a $1 billion data center in North Carolina, which attracts a lot of investment because of cheap land, cheap labor, and low utility prices. The latter is important because power is the No. 1 expense for maintaining a data center. The vast refrigeration units are pictured right.

OnLive requires servers with graphics chips so it can compute game imagery at lightning speed. But such servers are so densely packed with electronics that they generate a huge amount of heat and consume a lot of power. That’s why the infrastructure for the data center has to include cooling facilities and reliable electrical power. 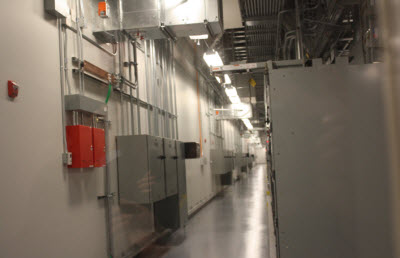 The place is so energy-efficient that it qualifies for big discounts from utility PG&E, with the savings amounting to $1 million a year or more. The building has plenty of steel girders to reinforce it against earthquake risks, and customers back their data up to multiple locations in case of disaster. It has its own power-generation capability (pictured right) for backup power.

Over time, Smith says, the company is looking for advances in both server and energy efficiency. In servers, low-power microprocessors with multiple computing cores are making it possible to pack more computing power in a given amount of space. The company has also looked at new solutions such as Bloom Energy, which sets up local power-generation units for small sections of the power grid. Equinix can’t yet use Bloom because of the need for backup energy and the ability to scale up the power needs quickly.

Despite the huge size of the place, Equinix will be able to operate it with a crew of maybe 25 people. And while the place was freezing cold when I visited it, it’s not going to be that way for long. When the place fills up with heat-generating computer servers, it’s going to be a lot warmer.