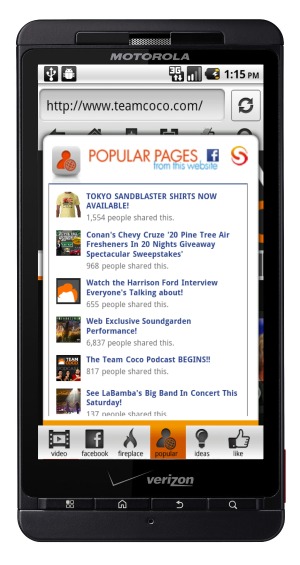 Dubbed the Skyfire 3.0, the new app will now work across a suite of platforms including Facebook Connect for Android 2.0 and higher devices. Skyfire for Android has seen rapid growth since its debut and now boasts close to two million users.

The Mountain View, Calif., company said Tuesday that the new product is its next step in its dedication to bringing cloud computing-based improvements to multimedia sharing on mobile devices.

Skyfire 3.0 is designed specifically for bringing Facebook to Android and other smartphones, allowing quick news feed access, an easy way to see the most popular ‘liked’ articles on any site, and the streaming of videos shared from friends.

“Skyfire was conceived with the vision that cloud computing could be the answer to solving some of the biggest problems in the mobile user experience.  For instance, how do we reconcile access to the full Internet, including lots of “fat” high quality video, with the realities of limited spectrum and overcrowded cel towers?,” Jeff Glueck, CEO of Skyfire told VentureBeat.  “The Skyfire cloud makes every video adaptive to network conditions and connection speeds, which means a smoother video playback, but also an average of 75 percent data savings for the network.”

New features offered by Skyfire 3.0 include Skyfire OneTouch Search, which let users enter a single search term and then choose to search Google, Facebook, VideoSurf, Digg, Twitter or Amazon with a single touch — and without having to navigate to separate sites.

“Skyfire has been the first developer in mobile browsing to concentrate on making video better, when older browsers were still focusing on speed to render text and photos.  And video use is growing fast on smartphones,” said Glueck.  “Cisco has projected 6,500 percent growth in video on wireless from 2009 to 2014.  Skyfire has been at the cutting edge, believing in mobile video from our start. When others believed that YouTube was all that smartphone users should hope for, we’ve always believed that the whole Internet should be accessible to users, not just one or two sites. In the last month, we’ve played video from over 100,000 sites, growing each day, and almost half the video streams come from sites not in the Top 10. There’s a long tail.”