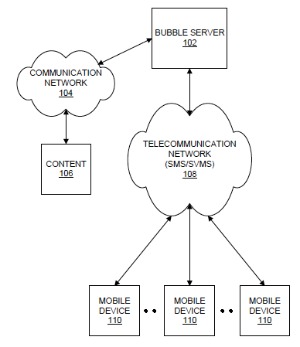 Voice and text messaging provider Bubble Motion today announced it has been awarded a patent for its work creating a mobile messaging system known as “Voice SMS.”

The Palo Alto, Calif.-based company said the patent will now allow users to click, record and send voice-recorded messages to on or several recipients, all without placing an actual call.

The company said that like standard text messaging, voice SMS would have the added benefits of adding emotion, nuance, and inflection that are often missing from simple texts.

The application of the patent could have implications for some of Silicon Valley’s marquee-name companies and impending deals.

Apple has acquired voice-based search company Siri in April of 2010, and others like Yahoo and Google have poured money into voice-enabled search options. The patent could also have a direct impact on companies that focus solely on voice-based SMS like Vlingo and Kirusa.

The fight over who will bring an easy, one-touch way to communicate via voice-recorded messages as simply as sending a text has been heated, as companies around the world have raced to be the first to patent their own in-house technology.

“This patent not only protects our intellectual property on a global level, but also demonstrates a long standing pattern of company innovation that has put us in the leadership position in the mobile messaging space globally,” Bubble Motion chief executive Tom Clayton, CEO of Bubble Motion, told VentureBeat.

Bubble Motion also produces BubbleBlog, also known as Bubbly, which is a voice blogging phone service where people share voice updates with friends, family, fans and followers. The company bills BubbleBlog as “Twitter with a voice”, and it’s growing quickly in India.