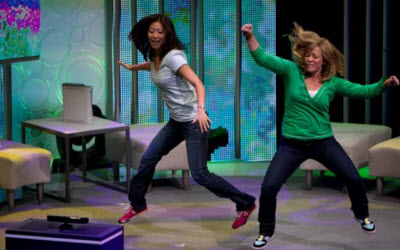 Thanks to strong demand over the Black Friday weekend, Microsoft said it has sold more than 2.5 million units of its Kinect motion-sensing system for the Xbox 360.

The sales numbers show that Kinect is proving to be a big hit since its debut 25 days ago. Don Mattrick, president of the Interactive Entertainment Business at Microsoft, said the company is on pace to hit its forecast for 5 million units sold by the end of the year. The hands-free game control system is Microsoft’s latest bid to dominate the living room in its ongoing battle with Sony and Nintendo. Kinect has a 3D motion-sensing camera that allows you to control a game with body movements, without the need to hold a game controller in your hands.

“Kinect on Xbox 360 was a top performer at Target this weekend,” said Nik Nayar, vice president, merchandising, at the Target retail chain. “We expect Kinect will be a must-have gift this holiday season, so Target will continue to receive consistent shipments of Kinect throughout December.”

Kinect is now available at more than 60,000 retailers in 38 countries. Nintendo, for its part, said this morning it sold 900,000 DS handheld units and 600,000 Wii consoles during the week of Black Friday. Sony has said its PlayStation Move motion-sensing wand units are in short supply as well, but it has not disclosed any sales numbers, beyond saying the company shipped 1 million units to retailers in its first 30 days. It’s a safe bet to assume that Microsoft is coming out on top among the console makers in the current round of competition.

Kinect isn’t perfect, as we noted in our review of the system. But we do expect it to be one of the top gifts of the holidays because it offers a kind of magical, easy-to-learn experience for people who don’t consider themselves to be gamers.