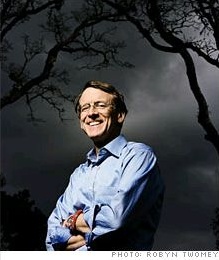 It appears that titan venture capital firm Kleiner Perkins is moving away from cleantech and going back to its roots in Internet investing, where it made famously good bets on companies like Amazon and Google.

With the hire of “Queen of the Net” Mary Meeker, Fortune speculates that Kleiner is moving back to its sweet spot after a big push into cleantech investing three years ago.  Earth2Tech points out that Kleiner’s cleantech exits like Amyris have yielded only modest returns.

It’s certainly a time of some soul-searching among green investors. Investing in the sector is down sharply. In the third quarter dollars flowing into cleantech in the U.S. have been cut by half since last year. And after struggles at capital-intensive companies like Solyndra, investors are saying they’re much more inclined to make capital-efficient, technology-focused (read: cheaper) investments in cleantech.

And yes, some venture capitalists have gone so far as to say there’s been a cleantech bubble. So now we’re seeing a pullback. But many also argue that there are still opportunities out there, they just have to be more selective going forward.

At VentureBeat’s GreenBeat 2010 conference earlier this month, a couple of attendees made a good point — cleantech investing has no poster child, no “Netscape moment,” as John Doerr (pictured) put it (though he forecast that one is coming). Basically, cleantech needs a Facebook.

The closest thing to that so far is perhaps Kleiner-backed Silver Spring Networks, a smart grid communications company. You could even go so far as to argue that they are, in fact, an Internet company, because they lay a network of wireless, IP-based communications for the smart grid. But as impressive as Silver Spring’s traction has been, there’s no IPO in sight yet (though rumors float around every once in a while). The company is about eight years old and has taken $218 million in funding. When there is an exit, it will not have been a quick or sexy one — which maybe says a lot about the nature of investing in cleantech to begin with.

What’s unclear is whether Kleiner Perkins is significantly shifting its strategy away from cleantech or simply making up lost time by pushing forward with more Internet investments, like its recently announced $250 million sFund for social applications and services.

At  GreenBeat 2010, Doerr dryly remarked that he’d once invested in an electric vehicle — the Segway. “One of my more famous mistakes,” Doerr concluded, to laughter. But he also pumped up the cleantech angle, saying, “There’s never been a better time to invest in green.

We asked Kleiner Perkins for comment on whether or not it’s really de-emphasizing cleantech investments, but it hasn’t responded.