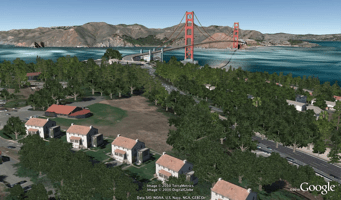 The features, while not likely to matter in the short term to Google’s ad-driven revenues, signal the Web search giant’s intent to stay on the cutting edge of mapping technology as it expands into the potentially lucrative market for local, geographically targeted search.

Most notably, Google’s Street View, which looks to digitize much of the world’s accessible areas through photos from its 360-degree camera-equipped van, has been fully integrated in the new version and allows users to zoom-in from outer space right to someone’s door step in one swish. The feature previously required users to click on Street View icons in available regions.

Additionally, for nature-lovers among us, Earth 6 boasts the introduction of 80 million 3D trees in Athens, Berlin, Chicago, New York City, San Francisco and Tokyo, which have been “digitally planted” using models of dozens of species of trees. The company also plans to work with environmental outreach programs such as Africa’s Green Belt Movement, Brazil’s Amazon Conservation Team, and Mexico’s Conabio to help model the planet’s threatened forests.

The ability to browse historical imagery on a location has also been made more easily accessible. Whenever there is a historical image of a location — allowing you to see how it looked back in time — a status bar will now be shown at the bottom.

The tool was previously updated back in June with version 5.2, adding an integrated Web browser and visualization of walking and biking tracks.