A new sharing widget from professional networking site LinkedIn should join all those Facebook and Twitter buttons starting today.

The company says the widget should work pretty similarly to what Facebook already offers. By just adding a few lines of code to their site, publishers can create a button to let users share any article on LinkedIn, plus (if they want) a counter showing how many others have shared it already. Publishers can sign up at the new LinkedIn for Publishers site.

The benefit for LinkedIn seems pretty straightforward. The sharing button should increase the amount of content and discussion in users’ LinkedIn news feeds, which in turn should bring them back to the site more often, encouraging them to use it (as chief executive Jeff Weiner has put it) as a “professional dashboard” rather than just a place to look for jobs.

It’s harder to guess what this will mean for publishers. For some, it could just be another way to share their content and slowly build their traffic, but there might be other websites that really benefit from exposing their content to a professional audience. LinkedIn’s continued relevance is predicated on the idea that there are some things you want to share with your professional connections (on LinkedIn) and others that you share with your social connections (on Facebook or elsewhere).

As a professional, we know the importance of keeping track of industry trends or business intelligence that will impact your daily work, and now we have made it easier for you to share that news and research with your peers. Use LinkedIn share to get a conversation started with clients and colleagues you haven’t reached out to in a while.

Initial publishers include Bloomberg, Forbes, and the San Jose Mercury news’ SiliconValley.com. As for VentureBeat, from what I understand, we’re working on adding the LinkedIn button, but we also need to bring back our Facebook and Twitter buttons. (Currently you can share our stories on various social networking services via the AddThis widget below.) So LinkedIn is on the list, but it’s not the only thing. 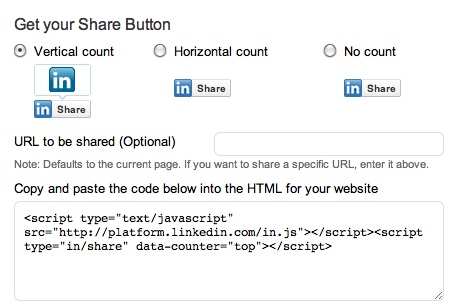