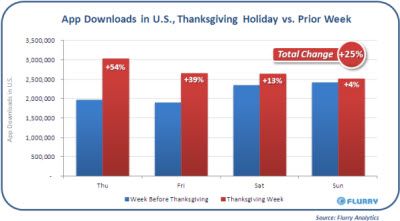 Downloads for smartphone apps were up 25 percent over the four days of the Thanksgiving holiday, from Thursday through Sunday, compared to the prior week. Downloads on Thanksgiving Day were the highest, up 54 percent compared to a week earlier. I can attest that just about every kid at my own holiday gathering was playing Angry Birds, the hot iPhone and Android game from Rovio.

Sales of Android and iPhone devices were also up during the Thanksgiving holiday weekend, Flurry said. Smartphone sales were up 31 percent compared to a week earlier. The growth was driven by Apple iOS devices (iPhones, iPads, and iPod Touch units) as well as Android devices such as the Samsung Galaxy S, Motorola Droid 2 and LG Optimus S. On Black Friday itself, sales were up 57 percent compared to the previous Friday.

Overall, Flurry predicts that the holidays will lead to another record-breaking season for app consumption on mobile devices. Overall, Black Friday was a success all around. This year, NPD Group reported that brick-and-mortar sales on Black Friday grew 6 percent over 2009, and that online shopping increased by 44 percent. Further, according to IBM’s Coremetrics, Cyber Monday online sales already exceeded this year’s Black Friday by 31 percent.