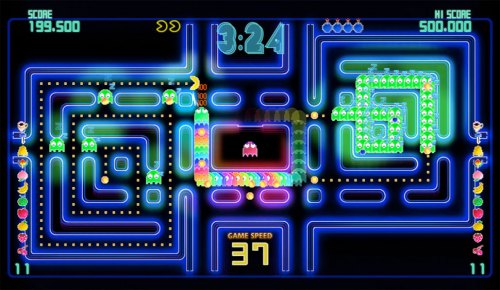 The original Pac-Man Championship Edition took what the world loved about Pac-Man and made it relevant again. They kept the gameplay we knew and loved and turned everything on its head by adding a timer. This made the game less about staying alive and more about moving as quickly as possible to get a higher score than all of your friends.

Pac-Man Championship Edition DX takes the divergent path of the original CE further down the pellet-popping warp hole. What emerges on the other side has more maps, more modes, and more visual-style choices, all with the most rewarding ghost-gobbling I've ever experienced. And yes, Pac-Man now has bombs.

Pac-Man CE DX keeps the timer of the original CE, along with that game's dichotomic system of constantly evolving in half-stage chunks, only that now, along with regular ghosts, the game has sleeping ghosts. These sleeping ghosts wake as soon as you waka-waka past them, but instead of behaving like the other ghosts, they hop in line and follow behind you in a ghost train. This means that if you turn around–or even if you just stop–you will be immediately eaten by the front of the ghost train.

Well, sort of. Luckily, whenever you move within range of a ghost, the game enters a slo-mo bullet-time, giving you plenty of time to change direction and get out of harm's way. This becomes very important later on, because as you do well, the game's speed increases significantly, up to 50 times its original setting, which puts Pac and the ghosts moving faster than the speed of sanity. Making mistakes drops the game's speed back down to reasonable levels, but because the goal is to score as many points as possible in a designated amount of time, you want to be moving as fast as you can handle it. By including the slow-motion dynamic, a game that would be frustratingly difficult becomes fun for all, and challenging for reasons besides the threat of death. 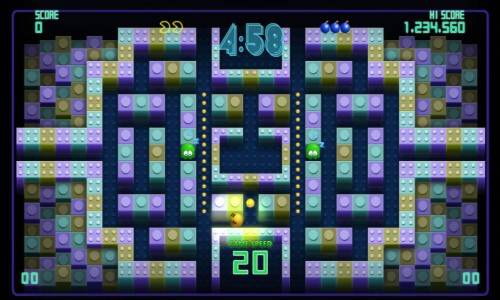 Just another of the many visual styles you can select before starting a game.

Even with the ghost train and the slo-mo bullet-time, just like old-school Pac-Man, you occasionally find yourself between a ghost and, well, another ghost. Where you would traditionally die, now you can press a button and use a bomb. These bombs knock any nearby ghosts temporarily back to the center-of-the-room-ghost-hut, giving you just enough time to choose a new route before those dead baddies are back on your tail. Bombs are gained by eating certain ghosts, and there are enough bombs that you almost always have one to use, which is just another reason that a good player will rarely die in Pac-Man CE DX. Every time you use a bomb, though, the gamespeed slows down, and you take one step away from besting that high-score. Again, the game is challenging for reasons besides a game-over state.

So hopefully, eventually, you will amass a huge ghost train of ghosts following your every move. Then you'll grab a power-pellet, instantly switch directions, and revel in the happy madness. Those ghosts, all lined up for the taking, can finally be yours. The hunted, for a brief period of time becomes the hunter, like he has since the beginning, but it's never been as satisfying. In a perfect mix of audio-visual feedback, the increasing tones, points, and sparks that emit from the game as you eat twenty or more ghosts at once is maybe the most pleasure that a person can receive from playing a videogame. It's like getting pure, uncut JOY injected straight into your fun organs, all through the safety of a 360 controller. 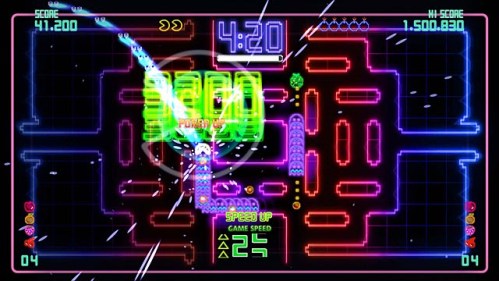 OH GOD LET ME AT THOSE DELICIOUS GHOSTS

The entire experience takes everything that was great about CE and makes it better. It's funner, sexier, and DX-ier, I guess. You will want to play it five minutes everyday just to try and beat your friends' high scores. Unfortunately, in the only bad decision they've made with the game, Namco-Bandai does not show your score on the leaderboards next to your friends' scores, and instead you have to do-the-math to see where you stand. It's 2010 and there's really no excuse for a mis-step like this in the social-integration of a game. That said, the rest of the package is so clean, so fun, and so worth the ten dollars that it's really hard to complain for more than 30 seconds, before hitting retry and going back for just one more game.